I know these appeals are always never responded to but...

Does anyone have copies of the UK Merry and Bright comic from the 1930s? Just scans as there are 1930s stories I am looking for.

email me at blacktowercg@hotmail.com with subject header Merry & Bright 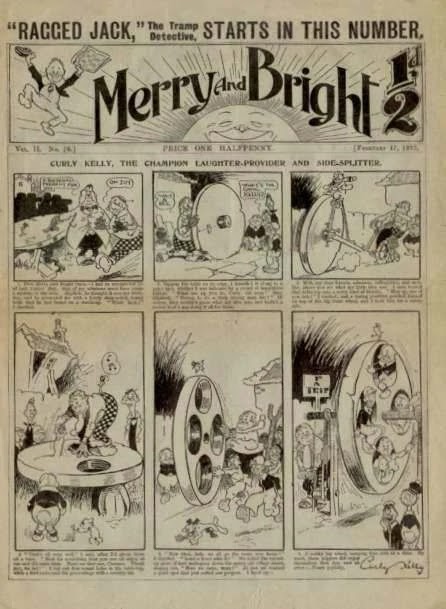 Posted by Terry Hooper-Scharf at 17:58 No comments:

Black Tower Gold -All The Links You Will Need!

So how do you get hold of copies of Black Tower Gold with Golden Age British comic strip reprints cleaned up for 2022 readers?
Glad you asked.
Here are all the links.
Why are you still here? Go buy and make me rich (like that'll happen!) 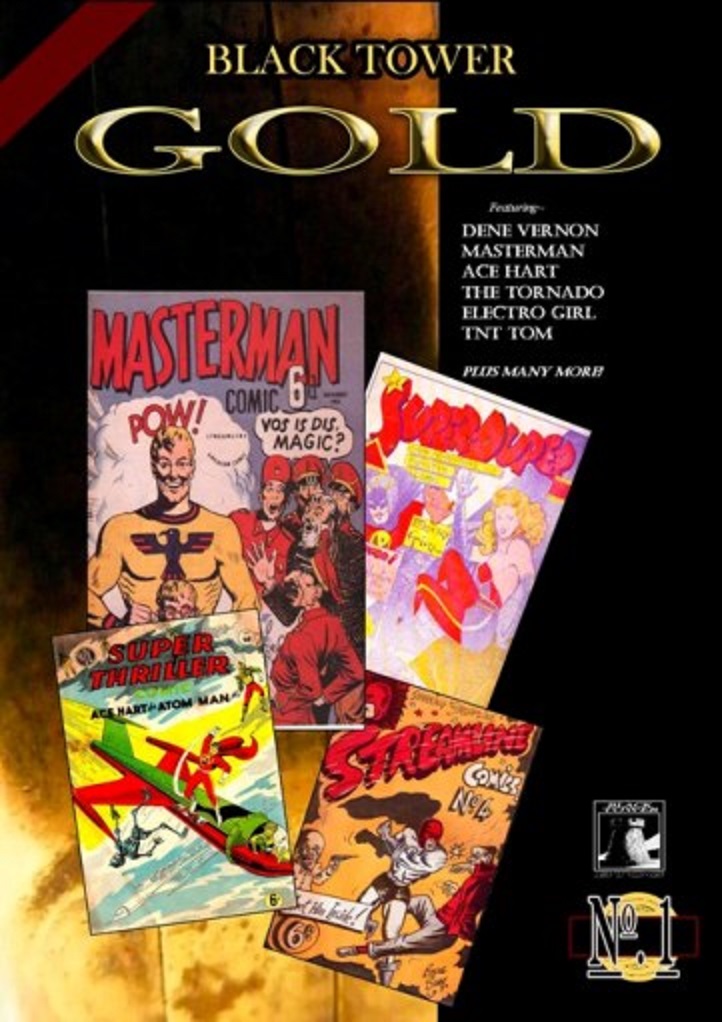 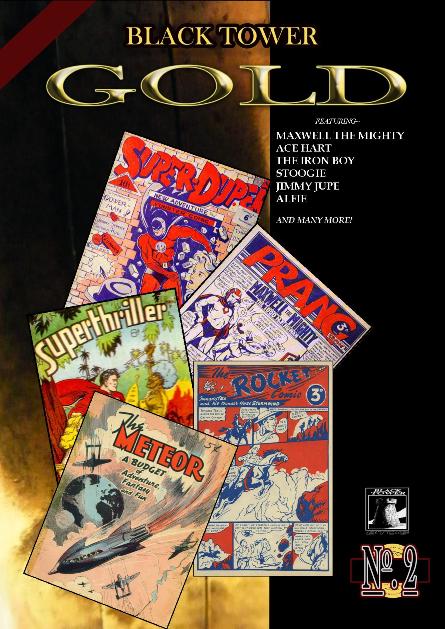 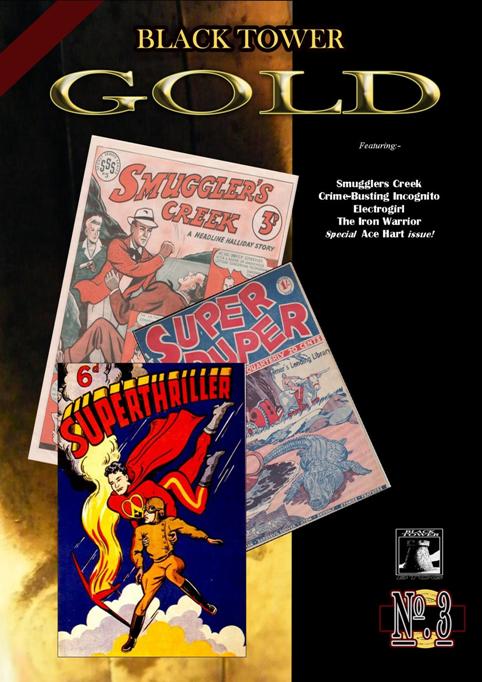 This is the third volume in Black Tower Comics’ collection of Golden Age British comic strips that have not seen print for 50-60 years!
Included in this volume is a bumper crop of Ace Hart:The Atom Man strips and an article on the character.
A complete 1949 comic in Smugglers Creek; Denis Gifford’s Search For The Secret City and science fiction legend Bryan Berry’s rendition of Kid Carter -Teenage Tec! A must for all comic collectors and historians.
************************************* 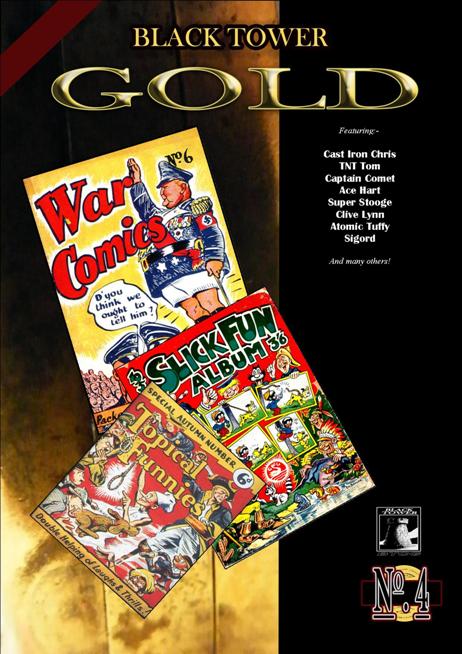 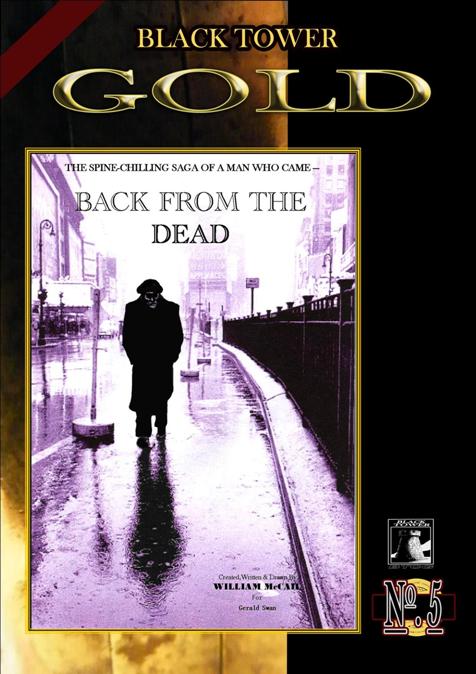 William McCail’s 1940 classic is reprinted for the first time in 80 years. 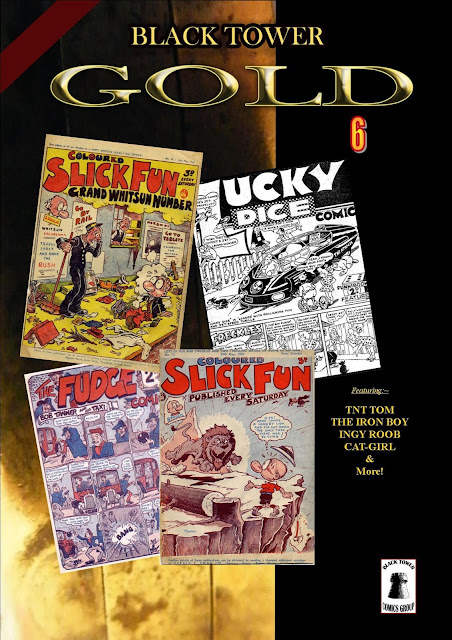 Yes! Now at issue 6 and bringing you more lost strips of the British Golden Age of Comics.There's a collection of strips featuring non other than TNT Tom and one of the weirdest UKGA characters -the Iron Boy.

Ever heard of Ingy Roob? Or his pet "Stretchy"? You will have if you read this issue.How about Dennis M. Readers Cat Girl?

Two other UK comics are reprinted in full, both from 1946 and the only issues ever published:Lucky Dice and The Fudge.

Black Tower -keeping UK comics history alive!
And if you want all of the above in one huge volume then.... 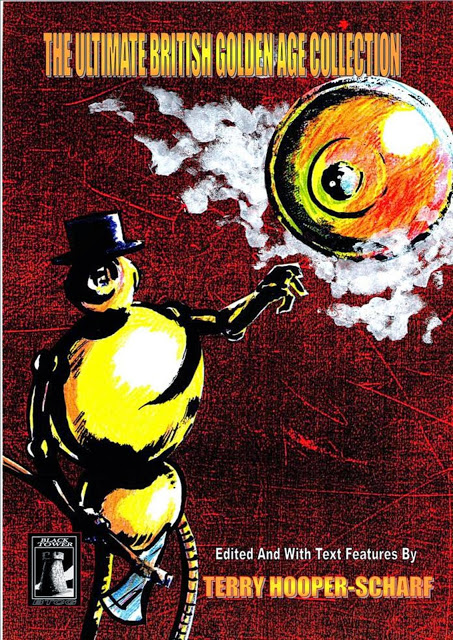 A4PaperbackB&W405 pages
Price: £25.00 (excl. VAT)Prints in 3-5 business days
http://www.lulu.com/shop/terry-hooper-scharf/the-ultimate-british-comics-gold-collection/paperback/product-22041282.html
Combining volumes 1-6 (still available as individual issues but that works out far more expensive) of the BT Golden Age British Comics Collections (minus adverts) this is the ultimate for any Golden Age collector or historian or just plain comic lover.
Features....Ace HartTNT TomElectrogirl Wonderman The Phantom RaiderCaptain Comet Acro MaidPhantom MaidDene VernonThe Iron BoyThe Boy FishProfessor AtomThe TornadoPowermanWonder BoySlicksureMasterman Dane JerrusAlfieTiny TodMaxwell The Mighty Back From The DeadZeno At The Earth's CoreColonel MastiffAlly SloperSuper InjunSuper Porker  (oo-er, no, Madam, ooh),Tiger ManKing Of The CloudsCaptain Comet
and MANY others!
Plus text features defining The Ages OF British Comics (Platignum, Gold, Silver), the artist William A. Ward and more.
If you knew nothing about British comics of the Platinum, Golden and Silver Ages then once you buy and read this book you'll be a goddam omic intellectual dinosaur! Yipes!
All in that beautiful Iron Warrior cover exclusively drawn for Black Tower by that meta-gargantuoso talented Ben R. Dilworth!
I sold my family to be able to get this book out! Help me buy them back by purchasing your very own
whizz-o copy today!
Posted by Terry Hooper-Scharf at 08:46 No comments: 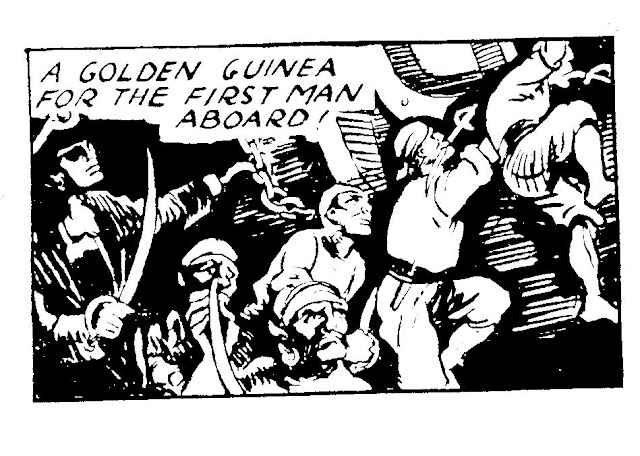 The British Golden Age of Comics Face Book page has been paused indefinitely. The reason for this was simple;I posted and posted, uploaded lots of images and evryone was aware of how to get hold of the reprint books and...

Very few if any responses. You assume that if people are fans or interested in a certain period or characters then they might ask questions or comment. Nope.

Remember the old Yahoo group had thousands of imges and hundreds of files and it was pretty much dead.

I am giving this blog a go until July at which time if its just me posting and no one bothering (or those certain bloggers stealing original work) then this also goes. Life's too short and I am quite happy to keep al the info in my head. Anything -such as the discovery of a Golden Age female hero- will go into publications. Decades of freebies and no credits are stopping. 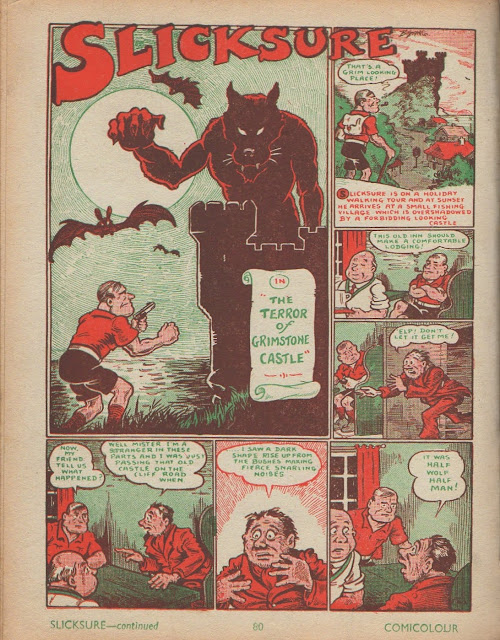 Posted by Terry Hooper-Scharf at 08:24 No comments:

"That is not possible" It Is 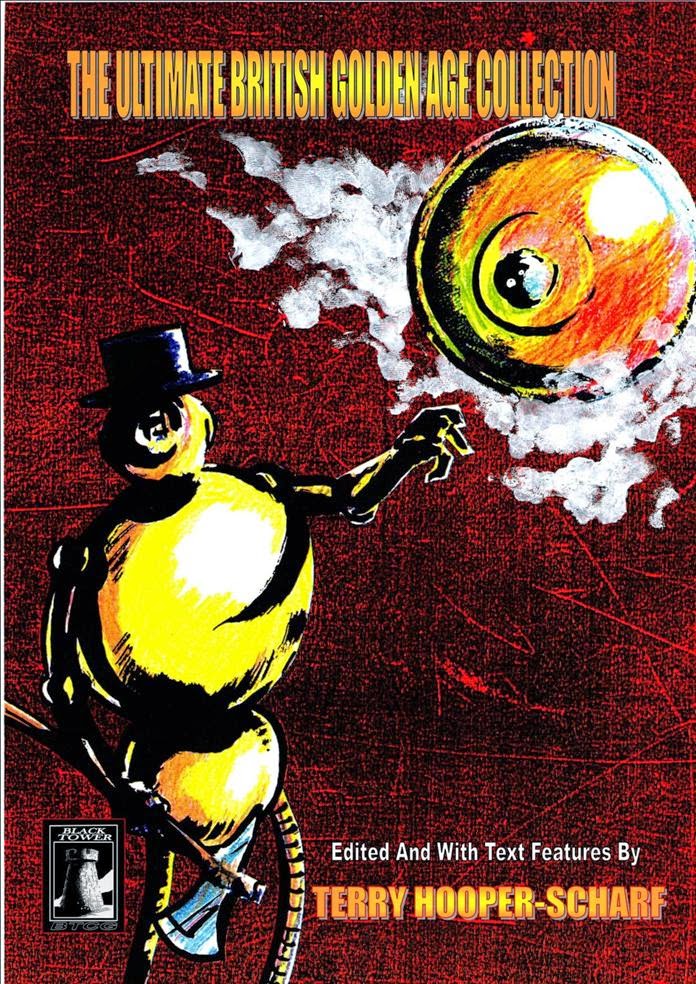 I was asked in an interview for a German comics magazine why I stopped publishing British Golden Age reprints?

Well, there are six volumes as well as the huge collected edition and in ten years the collected edition has sold 3 copies while the single volumes....
NOT ONE SINGLE COPY.
Each book can take months to produce and for them to just sit in internet limbo while all the 'fans' bemoan the fact that these comics and characters have vanished...well, you work it out.
I have a huge collection of 1940s comic albums/annuals and comics and they are not being scanned or reprinted.
I enjoy them myself and there is no fandom -you know those people who all said they would be buying copies when I published?
The interviewer did not believe me and thought I was trying to drum up sales so I showed him the online store dashboard and sales report. "That cannot be possible" he said.
It is.
Posted by Terry Hooper-Scharf at 15:04 No comments:

There is a Reason this Blog May Vanish Again

The blog was down for a couple of days for a very good reason: the first was trolling but those I just report these days as they cannot hide the acrual ISP they use. The second reason was the main cause.

Once again other bloggers were literally stealing posts, altering them slightly and posting them under their names and getting a lot of praise for 'their' discovery and work.

If this continues over the next week then anything new on Britiush Golden age comics will only be revealed in print. More than a decade of being ripped off is far more than enough.

Posted by Terry Hooper-Scharf at 08:33 No comments:

Lost Heroine Found and Comic Bits The Place To Find Them! 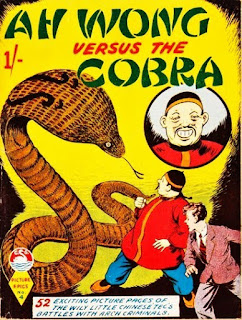 The first reason I check is to make sure no pages are missing and that there is no other damage that needs tending to first. Also...I love reading them!

The second reason is to see whether there are any characters I am unfamiliar with. My Vault of the Lost (that sounds cool...but I'm only referring to a section of my brain so...) has a stack of characters that no one else appears to know or care about (until I find them and then the Copy and Paste crew goes to work). There are a good few instances of my stumbling across a character not mentioned anywhere. Forgotten and as soon as I "show and tell" on the blog it is all grabbed and the purloiners start with their lies on how 'they' discovered this "lost gem". They know who they are as they check into CBO daily.

Comic Bits the Journal of British Diamond, Gold and early Silver ages comics as well as Penny Dreadfuls has featured some discoveries in its first two issues and issues 3 and 4 just need editing to make them presentable if I decide to publish them. In future any new discoveries will either be presented in Comic Bits or through a Black Tower publication as I am no longer in the mood for gving everything away after months of hard work.

Which brings us to the announcement I made..two weeks ago? Finding two more forgotten characters -female characters. Well, one turns out to be a slightly altered U.S. reprint that did make their way into some UK comics. At th time they were published (late 1940s) some new artists were trying to develop a more slick American style while working for Gerald Swan. This creates confusion unless you know what to look for.

It took a day but I found the original American comic strip and was able to dismiss it.

The second one, however, was British and was a superheroine (yeah, I wrote "heroine" -live with it). It seems to be a one off strip as I have almost a full collection of the publisher's annuals and even checked some comic issues -nothing.

Name? Who drew it? Sample art?

Well, if you are really that interested you will need to wait for either Comic Bits or another publication to see the full strip and info.I have been giving away everything on CBO since 1997 and that is without any support to keep the work going so if you are interested then you pay. 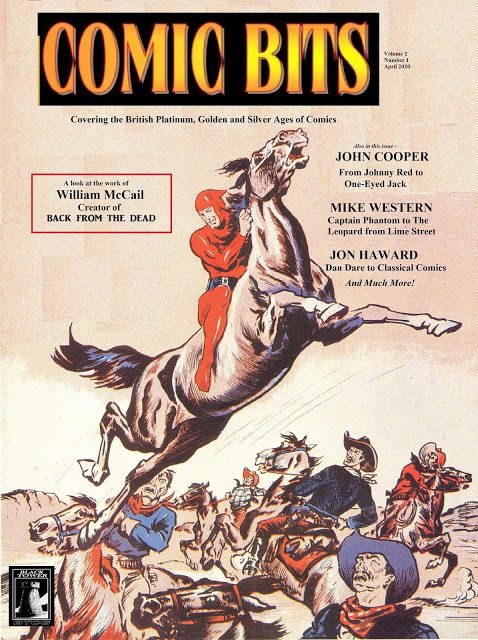 Posted by Terry Hooper-Scharf at 06:52 No comments: 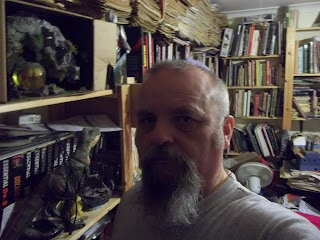 Oh yes. A new book just arrived today and I was expecting more illustrated text stories but instead it is a mix of text and comic sets (strips).

There are two female characters that I have never heard of before and I am going to be writing a post on these in the next week or so (I hope).

Nothing stays lost forever -not even old British characters!

Posted by Terry Hooper-Scharf at 08:44 No comments: