How YOU Can Buy Copies of the UK Golden Age Books

Please note that the Ultimate Golden Age Collection cannot be reduced in price as it is sold at the bare minimum price.

And if there is one thing "Herr Professor" loves it is discovering and presenting long lost UK Golden Age (1939-1951) comic strips and characters from publishers such as Gerald Swan, Foldes, Denis M. Reader, Cartoon Art Productions and others.Scanned and restored as best as can be considering the poor print quality of the rationing years -especially red, orange, yellow, blue and purple ink printing!Ace Hart The Atomic Man!  The Tornado!  TNT Tom!  Dene Vernon!  Acromaid!  Cat-Girl! Bring 'Em Back Hank! Robert Lovett:Back From The Dead and so many other action heroes and humour strip characters -William A. Ward, Jock McCaill and a host of known and unknown creators contribute -either in single volume "

The five separate volumes range from 68pp to 96pp each.  For well over 5 years they have been ridiculously priced at £6.00 ($8.00) which meant there was nothing in the way of profit or compensating for the amount of time and work put into each. And guess what? Absolutely no copies sold.  For that reason I have had to price them (still cheap) adequately so that they are each £8.00 ($10.00).  That still means you are getting better quality reproductions for far less money than an 8 pager or 12 pager comic from this period that may be moldy, torn or almost unreadable. 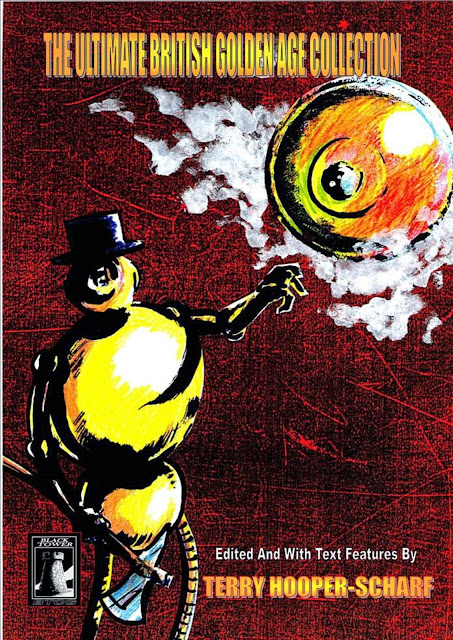 Combining volumes 1-6 (still available as individual issues but that works out far more expensive) of the BT Golden Age British Comics Collections (minus adverts) this is the ultimate for any Golden Age collector or historian or just plain comic lover.

Plus text features defining The Ages OF British Comics (Platignum, Gold, Silver), the artist William A. Ward and more.

If you knew nothing about British comics of the Platinum, Golden and Silver Ages then once you buy and read this book you'll be a goddam omic intellectual dinosaur! Yipes!

All in that beautiful Iron Warrior cover exclusively drawn for Black Tower by that meta-gargantuoso talented Ben R. Dilworth!

I sold my family to be able to get this book out! Help me buy them back by purchasing your very own
whizz-o copy today!
Posted by Terry Hooper-Scharf at 07:09