On The Price Of Old UK Comics 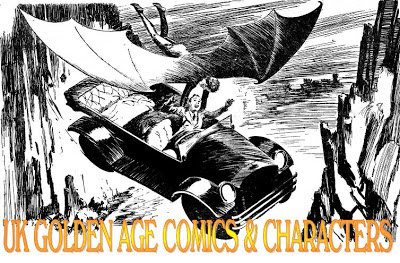 Over the weekend I met up with two fellows who I have mentioned before.  They valuate items for auction houses –no, don’t ask as I can’t say but the big ones.  They had been travelling around the observing auctions and talking to collectors. I was asked if I was free to chat “because you know more about these rare and obscure British comics of the 1930s-1950s”…After flattery like that what could I say?

Here is the conclusion they made after a three week trip –D.C. Thomson titles such as Beano and Dandy or certain Amalgamated Press (AP)  titles of the 1930s to early 1950s: VERY much sought after.

So I asked what sort of price they were estimating –apparently the first issue of Beano or Dandy and there was no fixed financial price.  “Idiots will pay ridiculous prices and for a first issue of either of those…who knows!”

It seems that not even an Eagle first issue would command the price of a first Beano or Dandy…yeah, I found that surprising.

Apparently, no AP title commanded anything similar.  I rattled off a few titles –no. Nothing.  What??  I asked what sort of price various titles might get.  A first issue of Weekly…£2-£4…..Action Weekly….£6.00 because of “notoriety”  and one of the men had privately auctioned off a full (first to last issue) run of Radio Fun for £100 –his colleague laughed at this and pointed out that auction houses had refused to sell that particular run because there “was no interest”.

I pointed out ebay prices and got two very loud howls of derision: “If you pay more than £4 for any weekly you are absolutely mad –and no one sane pays the fixed prices asked for on ebay!”  It was pointed out that one of my 1980s zines had sold on ebay in May for £25 –I can’t even sell these old books at their original price but it was called “rare” and “highly sought after”….what *******!

So we came to why I was contacted –comics from Swann, Fouldes, Comic Art Productions and so on. I was asked what sort of prices I had heard these comics going for?  I pointed out that finding them for sale tended to be rare  and I thought I was now going to be told they were worth a fortune.

I was kidding myself.

Both had copies of Gifford’s 1980s comics guide which included price estimates if you wanted to buy those books now.  Prepare for a major shock –apparently my jaw dropped and I looked “quite pale”!

It seems there was really no increased value to the books since Gifford wrote the guide. I pointed out the rarity of certain titles and suggested they must be more valuable now?

No.
“We are not talking American Golden Age comic titles here –we are talking British, mass and very cheaply produced comics with quite poor printing and paper a tramp would not put in his boot”  To which I tried to counter with various points. Even as I made those points I could see the problems.

No one has a vested interest in obscure characters.  Or as one of the men put it: “Often badly drawn and one dimensional characters” that, it seems, do not compare in any way to the glories of Eggo, Desperate Dan, Lord Snooty, etc..  “Most auction houses will not even consider selling single issues or even collections because their commissions are usually more than the comics make” –the usual commission being around 17% I was told.

I was told of an old tea chest (which are big) that was full of Swan comics –all wrapped in grease proof bags (nostalgia there!).  Approximately 100 comics plus a few from other publishers.  The owner had died and the house contents were sold but not the box of comics that were, apparently, advertised online but got no interest. Rather than cart the box to storage it was dumped at the back of the auction room by the bins.

Another set of 1940s comics had been used by one auction house to wrap fragile purchases to send to people in the and .

I pointed out here, VERY quickly, that if they put the word around I would certainly buy any boxes or comics that were of “no real interest or value” but was told for single issues it was doubtful anyone would contact me –postage would probably cost more than the comic itself.  Collections –“It just isn’t worth the auction house’s time” BUT they did promise to pass on my details.

Of course, this lack of interest might explain why group membership numbers (British Comic Book Archives) have not increased and why no one seems that…interested.

This was all depressing.

So, you see high prices for any books on ebay…remember anything over £4.00 is a “rip-off”

Well, I’ll still look out for Krakos The Egyptian or The Bat…and I’ll still accept scans of books. I like them any way!!
Posted by Terry Hooper-Scharf at 10:07