TNT Tina -The Mystery Solved...though I had the answer all along!

Unless you are one of those fans of rare British Golden Age comics then TNT Tom will mean nothing to you. However, as most of us old farts know, a similarly named character was used by Grant Morrison in the 2000 AD series Zenith. With TNT Tom in Zenith was TNT Tina.

That is where the mystery begins.

You see, in over 25 years of searching I never ever found an example of a TNT Tina strip nor anyone who had seen one.  Even the, uh, 'experts' on British comics had no idea. The best I got was that "Morrison made her up to add something to Tom's appearance."

My conclusion, about a year ago now, was that there was no TNT Tina.

A few weeks ago I was transferring old comic stuff from disc to flash drive and there was a scan of Coloured Slick Fun number 86, dated as 11th November, 1950. Scrolled through it and did a double take. A page I had just transferred with a heading "The Jungle Pals" was in this CSF as TNT Tom. In my rush I had miss-filed the page. 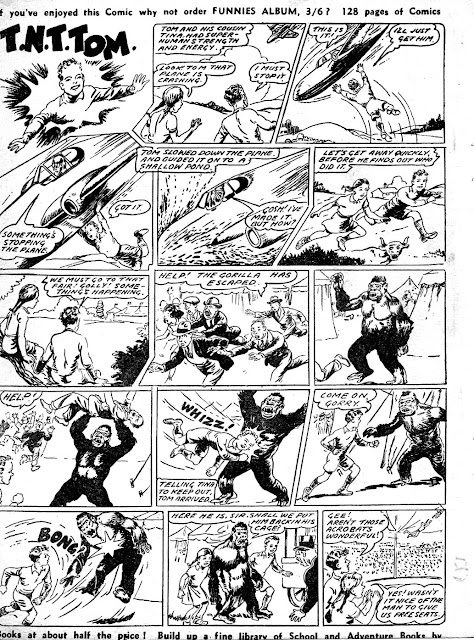 Oh yes. That is TNT Tina.

The scan was sent to me around 1999 so this means I KNEW that there was a TNT Tina. It's my age. 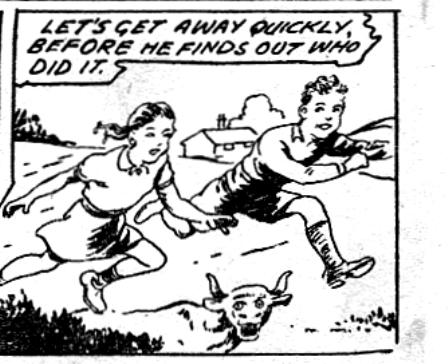 Holy Cow! Yep, Tina can fly just like Tom. Tom does all the rough stuff here but there is no doubt that Tom's cousin has the same abilities.  In fact, the duo even featured in The Return Of The Gods -our Earths counter-part to the Golden Age duo.

When I broke the news on some of my groups some were quite excited. We get like that.  The rare and forgotten UK Golden Age comics and characters when discovered are a breath of fresh and exciting air.

So here is the TNT Tina appearance -exclusive!
Posted by Terry Hooper-Scharf at 14:49