Hi, Comickers. Quick up-date on my Golden Age Q&A proposal made a while back. 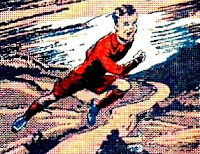 Things have been VERY slow in getting any questions to respond to regarding British Golden Age Comics -NOT D. C. Thomson nor Amalgamated Press- even my own Yahoo groups have only produced two questions: already answered in previous postings.

The deadline was the 20th August. Tomorrow. I guess I should not find it hard to believe that people are a little ignorant of the non Beano, Dandy comics.  People lapping up 1950s/1960s comics on other groups tend to get a little snooty when you mention Gerald Swan or Forshaw, et al  -some have made it clear they "do not even consider these seriously". At least one person told me that he would never even look at one of these comics??

Oh boy. The difference between the UK and US...even other countries where they are looking at their own Golden Ages. Incredible.

But I'm not going anywhere just yet so any questions....

Posted by Terry Hooper-Scharf at 06:43