A re-posting from the old CBO site.

Denis Gifford in his The Complete Catalogue Of British Comics (Webb & Bower, 1985) notes that the 1930s was the UKs Golden Age.  The 1920s had seen comics develop  so that by 1930 the creators/editors were producing quality entertainment for children.

Unfortunately, some former Austrian Corporal decided to go and start a “bit of a tiff” in Europe that became World War II.

This ushered in what Denis called “The Dark Ages.”

After the Germans took Norway the paper shortages really kicked in.  Puck, Tiger Tim’s Weekly, Joker and other titles began to disappear.  However, even if new comics were not really allowed the law did allow for unconnected one-shots which was a god send to many.  Philipp Marx, a refugee, issued two undated and un-numbered editions of The New Comics.  These sold out.  Kids were starved for comics in the UK while their US counter-parts were enjoying the four colour Golden Age.  So, Marx issued a new title each week (almost –no dating means it is hard to tell!). 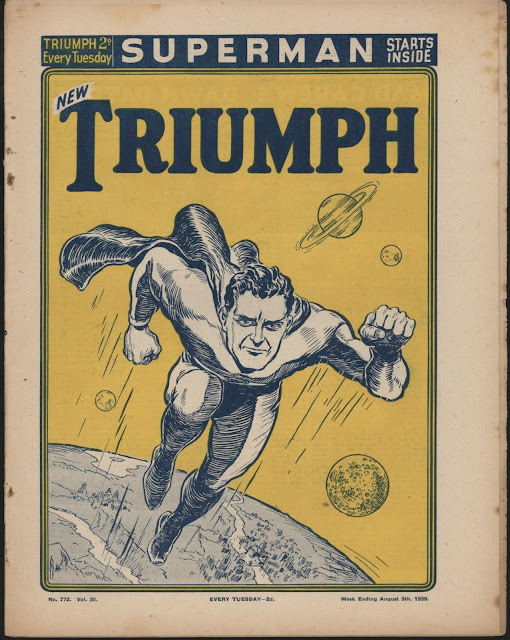 Gerald Swan and many others tried their hand at comics, even if Swan did later consider his comics a non-topic for discussion but would only talk in depth about his pulp sci fi/horror books.


These comics were printed on any type of paper.  That is no exaggeration –any kind of paper available was used.  Stiff beige cardboard, silver paper in fact, if it could take ink it was used.  The print quality was also poor at times.  This all led to easily torn pages, fading ink and even problems you might not really expect with paper and ink.

My favourite is orange or purple –even a sort of blue- ink.  Little solid black so you got black, white and orage but with faded blue text in speech balloons.  The low quality paper stock also meant that “foxing” (the brown spotting you find in very old books) kicked in very early.  Low quality stapling created its own problems since no one was going to use good quality staples when any and all metal was scarce.

Of course, as in the US, there were all sorts of drives going on –metal shortages led to dust bins, park railings and much more being collected.  Paper rationing led many parents to throw out the kids’ comics.  Many kids feeling that “war spirit” were all too keen to hand in old comics.

The poor quality of printing, the paper stocks used and trashing of these old comics mean that, as with the US Golden Age comics, many became very very rare.  In fact, probably rarer than US GA comics.
There are collectors who have these books and I know of several who have scanned their collections.  However, they will not share or even help with projects such as the British Comic Book Archive for one main reason.  The reason, they give is that “sharing scans of the books will make my comic collection less valuable!”

That in itself is rubbish.  You can have the internet flooded with these Golden Age British comics but they are just scans.  An actual book you can touch is far more valuable to a collector or prospective buyer because it is a real, actual object. True, even these rare GA British books are not that valuable –some on ebay recently were going for £1.99 and £3.99 ($2-4).

Also, the collectors I spoke to had no intention of selling their books which makes the whole argument even more pointless.

As collectors in the US and elsewhere have found out, scans can tend to peak interest and make printed books more valuable.  As it stands, only a few old farts like me know or remember the characters and publishers from this period –it kills any potential interest.

Even my Black Tower Gold Collections do not attract great sales but, as I think I’ve written before, these were pet projects intended to keep interest in the characters going and offering comic fans the chance to see these lost strips.  Also, the collection is all black and white reprint so the collector/hoarder has the advantage of colour original books.

I never expect collectors in the UK to share as Australian, New Zealand, German and US comic collectors do. It’s just how British collectors are.  After 20+ years of trying I’ve frozen the BCBA.  I would like to see it grow but….

If you have non-Amalgamated Press/Thomson comics you want to add to the few meagre examples forwarded mainly from the United States (!) please feel free to get in touch and maybe, one day, a fully British Comic Books Archive can be re-launched.

Posted by Terry Hooper-Scharf at 04:18