ZIP-BANG! IT'S THE MOON MAN!

W. Forshaws (Liverpool) Zip-Bang Comic was published between 1946-1947 and, according to Denis Gifford saw two issues, though I have never found any second issue it's safe to say Denis no doubt had a copy.

In his book Space Aces! (Greenwood Pub., London, 1991) Denis does not state which of the two issues Moon Man appeared in -the reproduced cover (below) carries no issue number as that was normal at the time).

As there appears to have only been one appearance of the character according to Denis, I'm going to guess at issue number 1 -but don't quote me!

Judging by the quote Denis gives, this Moon Man appears to have been on Earth or watching it for a while.  Another common feature of comics back then was the lack of space (due to ink and paper rationing) to give a background story. 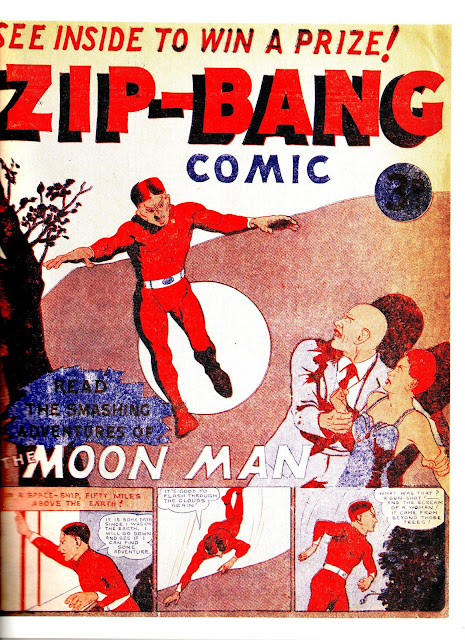 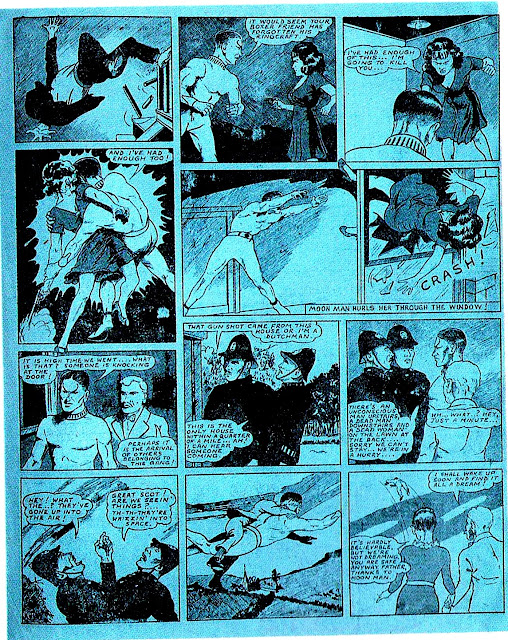 I have cleaned up the page to a degree to make it a bit crisper -if that's possible! 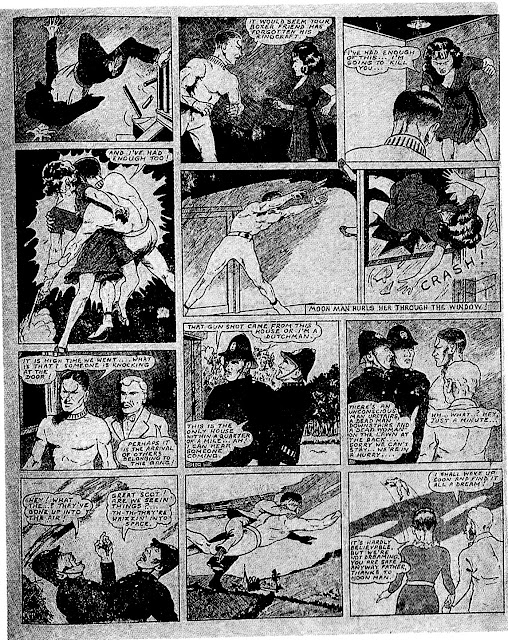 The information given is:

"In a space-ship fifty miles above the Earth hovers the Moon Man, saying to himself, 'It is some days since I was on the Earth. I will go down and see if I can find some adventure.' As he flies through the skies, he remarks, 'It's good to flash through the clouds again!'.

"Scarcely has he landed when he hears a gunshot and the scream of a woman. A gang of crooks have kidnapped the inventor of a secret ray!  'Moon Man will soon destroy these criminals!' he tells the distraught daughter, and flies after the crooks' car.

"To get the professor's secret, the crooks plan to ram a red-hot needle under his finger nails.  'Y-you devils!' cries the prof. 'Moan!'  But the Moon Man arrives, crying 'I'm the Man from the Moon!'  The crooks are not nonplussed.  Indeed, they are plussed, for one replies, 'Meet the ex-heavyweight champion of Ireland!'  After much hand-to-hand fighting and a struggle with a lady crook with short skirts and a neckline to match, Moon Man restores the prof to his daughter and flies home.

And that was it.

There is no reason why Moon Man is watching Earth that we know of.  We know he flies, he has no problem with fisticuffs but that is it.  Today we have to fill in that back detail to a degree.

For instance, in the character's Black Tower appearances we know he flies, he has to have a certain degree of invulnerability because he is in space and then flies down to Earth so he's dealing with extreme cold and heat. Whether he can take small arms fire...that's an open question though it seems likely.

In his more recent cameo in Black Tower Adventure -"The Cross Earths Caper"- we see he is part of one of the smallish communities living below the Moons surface -but his is another Earth version but there is no reason to doubt his counterpart comes from the same background.

I think it safe to say this was a one-off appearance since Denis tended to note "and in the very next issue...."

In 2014 it is planned that Moon Man, along with his other planetary pal, Mars Man, will take a much bigger role in Moon War.

It really is a pity that the artist did not sign his work -despite the idea that it was the companies that did not allow this, many artists did not sign work because it was comic work. Oh, and quite a few moonlighted from AP or Thomson so if they were found out the sack beckoned (they got fired).

Hopefully, one day we'll find out who the artist is. I hope so.
Posted by Terry Hooper-Scharf at 10:42