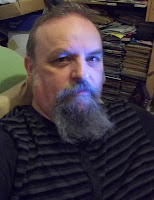 I'm hoping that Ernesto Guevara does not mind that I'm using part of an email I sent him  to explain things.

...the problem was, as in the US, paper drives for the war effort. Even if kids never wanted to part with their comics their mum's no doubt did!  I know Denis Gifford mentioned -in one of his books also I think- that he came home one day to find his mother had cleared out the pesky comics!

We have so much info via books and magazines like Alter Ego on the US Golden Age but the UK Golden Age seems to have been forgotten. Swan, Denis M. Reader, et al were the life blood of the UK GA and I was very depressed to have some scanarama and Spacevoucher members say they never considered these publishers or their books worth noting.  Yet, get a Dandy or Beano or Amalgamated Press book of that period and its song, wine and fireworks!

I do know there are at least two collectors on one of my groups (they think anonymously ?!) who have Back From The Dead, Krakos The Egyptian and The Bat in their collections but won't share.  The odd thing is that those who might not have a problem sharing are more likely not on the internet or haven't found the yahoo group -its why I duplicated the British Golden Age blogs so its on Word Press and Blogger so one of them might stumble upon it!

In fact, through Denis Ray (an American) and Ernesto (I know there is another guy but my memory for names!) we've come up with 100% more on the small publishers of 1939-1951 than was available before.

I've done this before but, as I'm getting over a migraine and couldn't draw or finish editing, I thought I would spend the day looking online for British Golden Age Comics or groups dealing with them.

With the odd break, after seven hours, every single image points me back to my own sites (there is a free servers site I'm just up-dating).  On Yahoo there are only two groups -Britcomics and the BCBA.

This, to me, is very, very depressing.  It might also explain why the British Golden Age collections I published hardly sell.  Having written that I do know scans of those books are widely distributed -illegally meaning I lose money.

After about three decades of looking there has been some headway made.

I'll keep at this, as I'm sure will other members when they can, but I have this image of my funeral and someone running in breathless waving a comic -"Is it too late -I've found a copy of Swan's Krakos comic!!"

In fact, though the completed collected book eludes us 2 sample pages from a William A. Ward Krakos strip plus a complete one have come to light in the last two weeks  -the latter features in the new Tales Of Terror 4 -see, we're making headway!

We just need to keep letting people we know and on other groups know that we need scans!!  That 4Share account needs to be fit to bursting!  But I'm getting really weary of chasing Holy Grails.

I need to also find some way of making sure that if I pop off the Archive is still there.

And the Golden Age strips/books we find are usually in a heck of a state. Different qualities of paper were used -none of them of a high standard. Inks and the quality of printing varied and you'll find orange inked pages, blue, green and even red inked pages. Now if you are converting that to black and white, or more accurately grey-tone, it's a nightmare!

Oh lords of comics -then you get the foxing, mold or spattering of ink (from printing). And worst of all the pen scribbles and tears repaired using sellotape (AAARGH!).

Some people who have seen an original scanned page do not believe it is what the printed version comes from. I'll demonstrate but I want to share a funny story first.

I posted the following page on a couple of my groups. "Stew" emails and asks how I got the page when he hasn't scanned it yet -?!

Then Dave sends me an email with the same comment.

I've seen THEIR pages now and can tell you they are the same page, tear and the tape repairs are almost identical.

It could be that this particular book was damaged during printing and several copies were affected. Whatever, it's weird.

Anyway, this is the sort of original page I get: 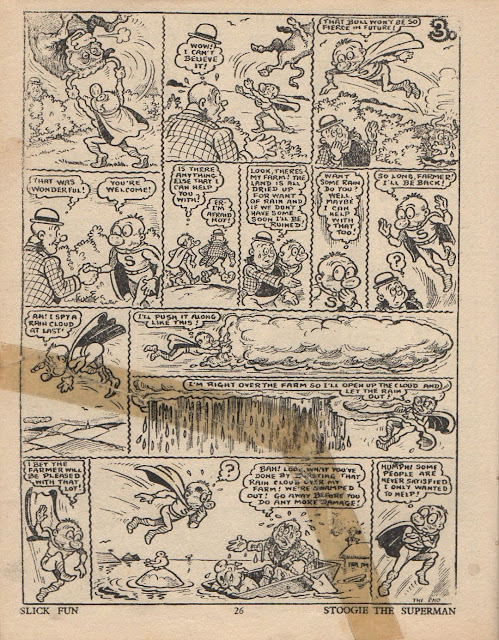 It's dis-coloured and there is that tear and the yellowing-brown tape. First thing to do is get rid of the colour from the scan so I get this: 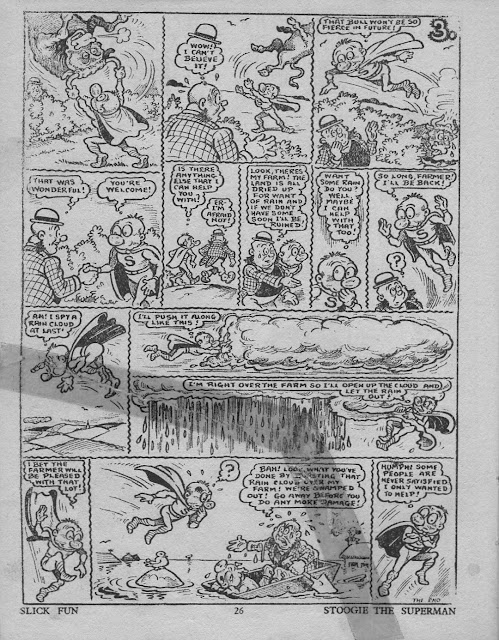 It's a sort of off grey. So my next move is to up the contrast and get this: 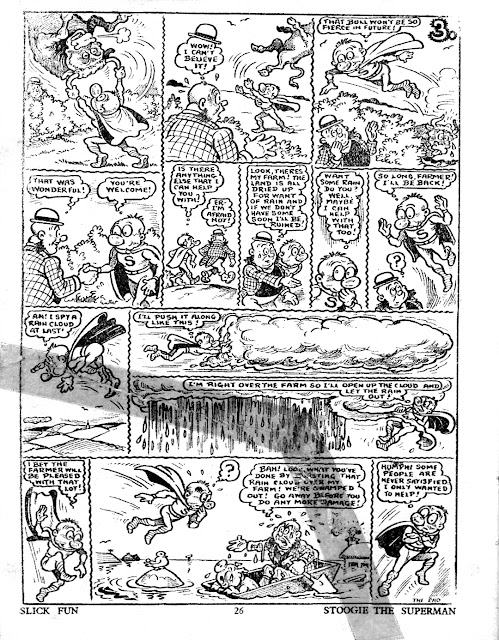 Which means pushing up the brightness, saving that and then upping the contrast to get this: 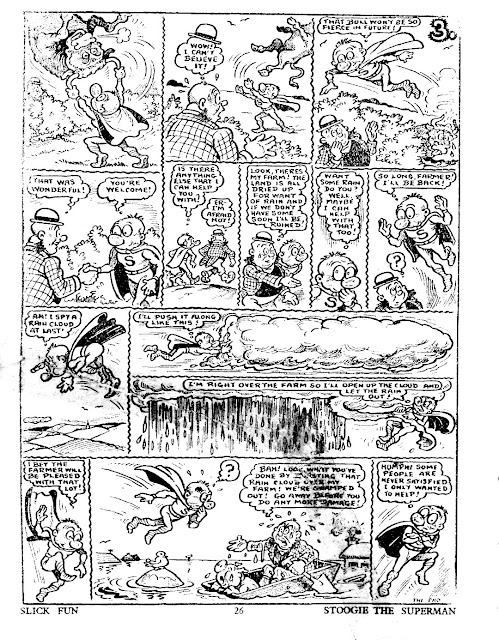 You can still see the tear so a bit more fine tuning and.... 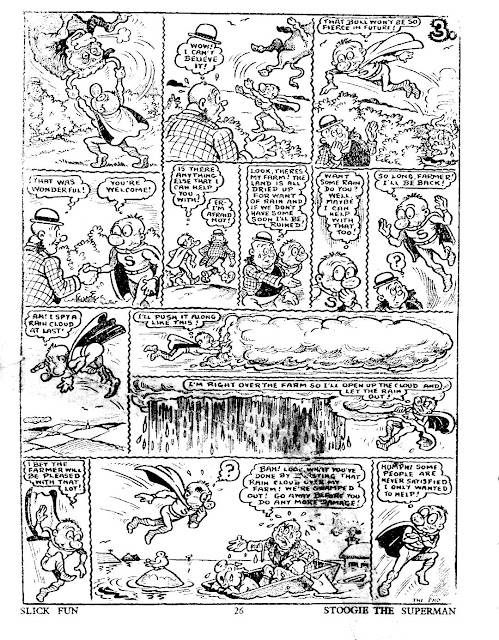 This is close to the finished item but on this I would enlarge the page to around 400% and then deal with the tear in Paint Shop.

One page like this can take up to 2 hours to tidy.

One thing I will not do is re-panel. The whole point is to show the original strip and how it appeared.  Some artists draw crooked panels. I learned a long time ago to leave these! I 'straightened' a page in photo-shop to correct the tilt on a page but then realized something else was crooked. I corrected it...uhh, not that wasn't right...I then stepped back and realized most of the panels were just very faint lines (as in the above page).  So I left it.

You have to remember that William Ward, Jock McCail, Glynne Protheroe and others were writing and drawing their own strips -a huge number of them.  As far as Gerald Swan was concerned the comics were throw-away entertainment for kids so as long as his books were filled and he raked in the coppers or brass or silver he was happy.

And the books end up battered or chucked in a box in an attic, a cellar or even under an old bed.  we're lucky that not all "mums" threw out "those silly comics"!

When people say to me "These aren't very good quality print-wise are they?" I say they should buy an original Swan comic and check the quality....oh, wait, very few appear for sell so they can't. Also, I've had one purchaser of the Ultimate British Golden Age Collection write that he thought he would never see the comics he read as a kid again (he's 75 years old) -"and in a lot better quality!"

THAT makes the work worth it.

Posted by Terry Hooper-Scharf at 14:12