This applies here as much as it does on my Yahoo groups so here's what I wrote! 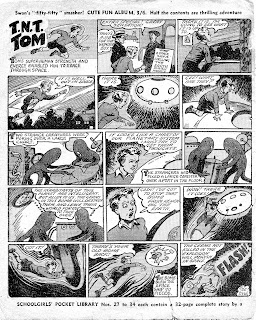 You know, it struck me whilst I was drawing this afternoon. It was a cricket ball but I've no idea where it came from.

"Start with a gag" they told me. nyah -bit surrealistic.

Anyway, it did occur to me as I was drawing that I probably am the most knowledgeable person on UK comic characters of the 1930s-1951 (NOT D. C. Thomson nor Amalgamated Press!).  I've often asked questions or referred to characters here and got either no responses or answers telling me you've never heard of them before -let alone seen them

I recall once asking here, and on the British Golden Age Comics blog which characters from that 1939-1951 period you would include on a team. Again -no one had any ideas.

If you have a question about a character from that period or any comic related question involving British comics (NOT D. C. Thomson nor AP!!) ask!! I'll put the whole lot together as a posting on the blog and as a File on group later.

What do you think?

Come on -we need to keep this group alive!!!

So, think and get back with your questions before 20th August. If none received then I'll give up!

Terry
Posted by Terry Hooper-Scharf at 13:15