Why re-post this article since it was first published back in 2000 and several times since then?  Well, despite the "serious comics history" pundits being given the link on a number of occasions it appears I am beneath their interest. I know this because they are now stating that the Overstreet Price Guide has published 'new' info.
Here is what someone wrote on Yahoos Platignum Comics group:

"But even that big news in Comic Book History has been overturned, with the discovery of an even earlier comic book, entitled The Glasgow Looking Glass, published in Scotland, in 1825."

Characters not listed even in Denis Gifford references have been found. These have started to appear in the Black Tower Golden Age Classics series.  As they are unlikely to be big money earners the cover prices were kept low for those interested in the subject. 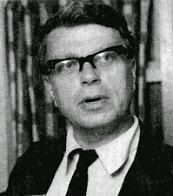 
Here is a slightly up-dated version of my article defining the British ages of comics from my British Golden Age Comics web site and a couple years back on CBO.

The late Denis Gifford spent many decades chronicling the history of British comics.  It was a never-ending task and at least we still have his books to rely on –these have been so plagiarised by new ‘experts’ that it shows just how valuable any Gifford book is. For this reason,I am relying solely on Denis’s and the “Tel’s From The Crypt” feature from vol.1 no.1 of COMIC BITS [1999].


Of course,there are some who would argue that comic strips go back further than the dates I give. This is debatable and,hopefully,one day the UK will have a symposium on the subject!

Looking Glass was a tabloid sized periodical published by Thomas McLean and could be purchased as either a plain or hand-coloured edition. Some 36 issues were published starting on 1st January, 1830 until December, 1832 -but from issue number 13, that was published on 1st January, 1831, it suddenly got retitled to McLean's Monthly Sheet of Caricature or The Looking Glass. 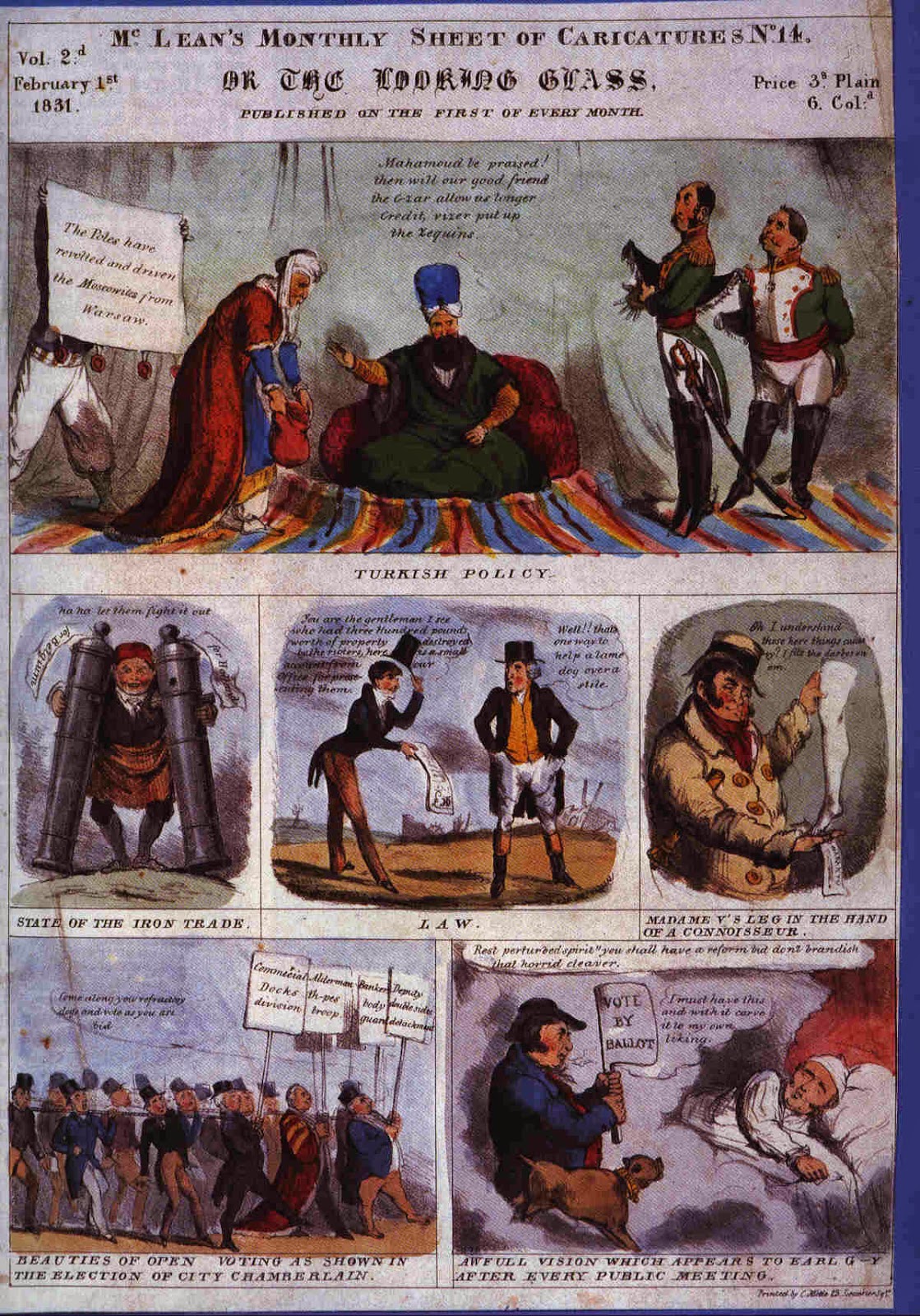 
THIS is the comic 'newly discovered' by the Overstreet Price Guide!

According to Denis,the first comic magazine was actually titled…The Comick Magazine!  The magazine appeared on 1st April,1796.  The publisher was Mr Harrison of 18 Paternoster Row,London who describe the title as “The compleat Library of Mirth,Humour,Wit,Gaiety and Entertainment”.


Most purists would argue that The Comick Magazine was wholly text,however,it did come “enriched with  William Hogarth’s Celebrated Humorous,Comical and Moral Prints”. –one per monthly issue!  These prints formed the series “Industry and Idleness” and when put together in their “narrative sequence”,argued Gifford,”they could be described  as an early form of comic strip” 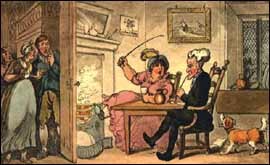 Above: Dr Syntax on Tour

Thomas Rowlandson  provided plates for The Caricature Magazine [1808].  On the 1st May,1809 came The Poetical Magazine and it was in this –Rowlandson the artist once more—that what is arguably the first British ‘comic’ super star was born:Dr Syntax!   The serial by William Combe,”The Schoolmaster’s Tour” was Dr Syntax’s first,uh,outing and in 1812 was reprinted in book form [graphic novel?] as “The Tour Of Dr Syntax in Search of The Picturesque”.  This featured 31coloured plates. 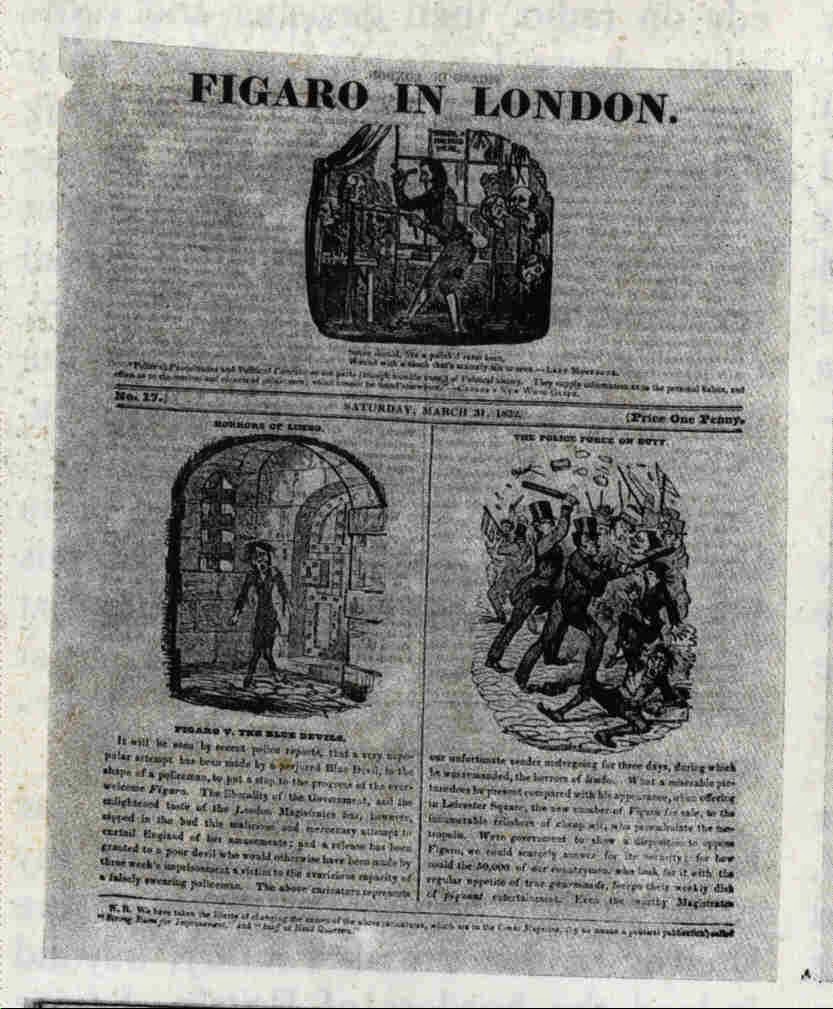 Inspired by the French funny paper Figaro,on 10th December,1831,the four page weekly Figaro In London appeared.  Cover and interior cartoons were by Robert Seymour.  This first funny weekly went on for eight years and was to inspire [imitation] spin-offs such as Figaro In Liverpool and Figaro In Sheffield.    We can see the future shape of the comic industry appearing here!


Punch In London  appeared on 14th January,1832 –this weekly lasted 17 issues and the last featured  17 cartoons!


The longest lived comic magazine,of course,was Punch from 17th July,1841 until its demise in 2002!

It is a fact that Punch,on 1st July,1843,introduced the word “cartoon” into the English language;on that date the magazine announced the publication of “several exquisite designs to be called Punch’s Cartoons”.   Two weeks later the first appeared,the artist being John Leech.  [for more info on Punch see http://www.punch.co.uk/] 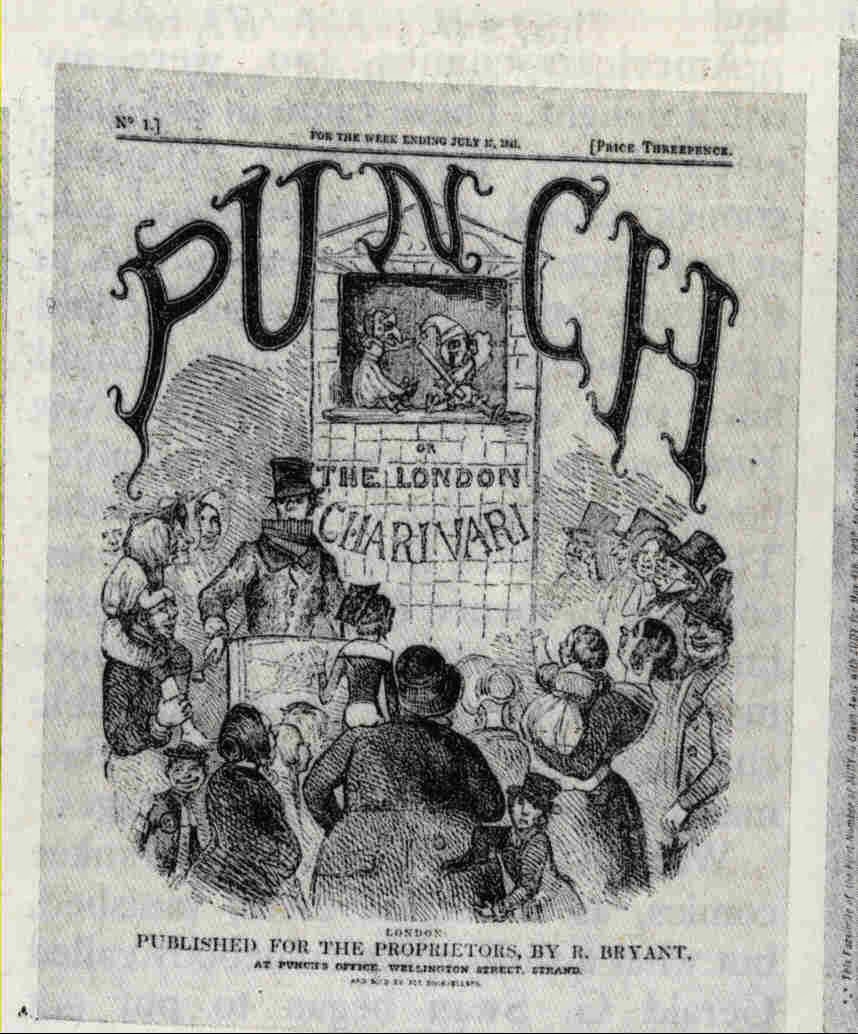 
In 1905 Mr Briggs was still being reprinted in six penny paperbacks.


Judy~The London Serio-Comic Journal started on 1st May,1867 and,on 14th August of the same year introduced a character  who became one of the greatest comic heroes of the day…….Ally Sloper!


Ally Sloper [so called because,when a debt collector turned up he Sloped off down the Alley!] was a bald headed,bulbous nosed figure with a rather battered hat. ..often described as a Mr Micawber type [as played by W.C.Fields and others over the years].  Ally was constantly trying to make money but more often than not never quite succeeded.


Merchandise abounded, Sloper Pewter mugs, figurines, bottles and much,much more.  And you can learn a great deal more on a wonderful web site –


There was an Ally Sloper comic in 1948 and some might think that was it.  However, Walter Bell drew the old lad in Ally Sloper, a British comics magazine published by Denis and Alan Class in the 1970s and soon to reappear in Ally Sloper’s Comic Bits [successor to Comic Bits].

Note: since this was first written the Ally Sloper's Comic Bits was shelved and also, in an interview with Alan Class, he told me he was NOT publisher of the 1970s fanzine! 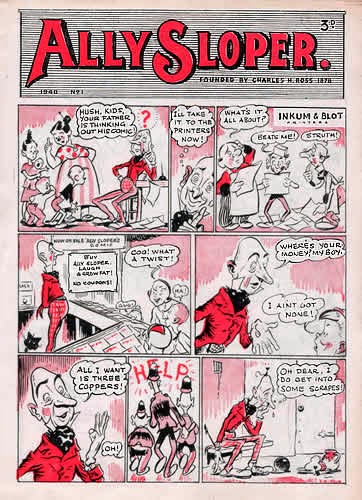 
Ally has certainly lived longer than his creator, Charles Henry Ross, could probably ever have imagined!


Into the 20th Century and there was the rise of many illustrated text stories and comic strips with text under each panel.


D.C. Thomson had titles like ADVENTURE and ROVER.  Alfred Harmsworth’s,and later his Amalgamated Press’, COMIC CUTS was the first comic though.  Issue 1 was published on 17th May,1890 and the final issue was published on 12th September,1953 with issue number 3006! 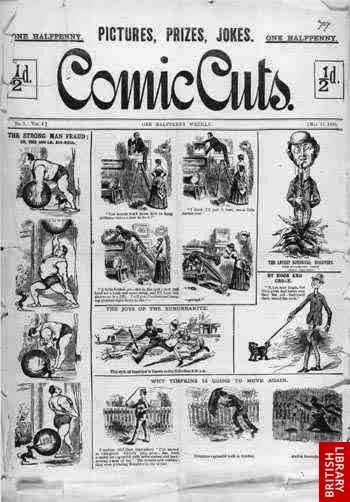 But the 1930s saw a virtual explosion in comics from small publishers outside London.  These included Merry Midget, no.1 dated Saturday,12th September,1931 and published by Provincial Comics Ltd.,Bath –and the other  title from this publisher was Sparkler.  Also publishing from Bath were Target Publications who produced Rattler and Target.


Now these were traditional humour strips and gags along with text adventure stories.  But in 1939 something happened that ended the Diamond Age and saw the beginning of the Golden Age.


On the 8th July,1939,the Amalgamated Press published,in Triumph, the strip “Derickson Dene”,drawn by that "mysterious" comic great Nat Brand.  Gifford described the strip as “a four page serial strip that established him [Dene] as the first British super hero in the American comic book style”. 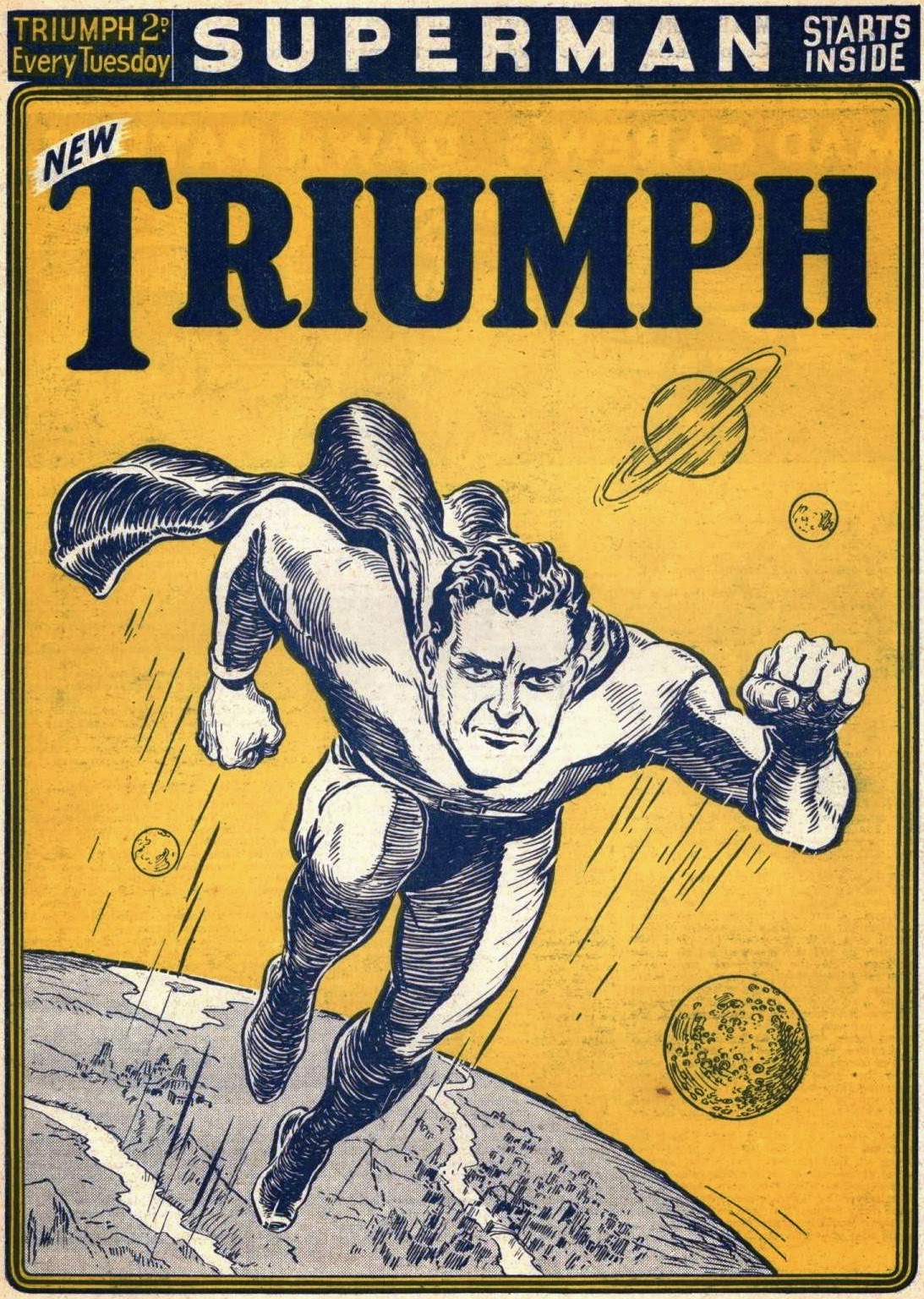 And then,on the 5th August,1939,in Triumph no.772,compilations of the Siegel and  Shuster Superman newspaper strips started.  On the front cover,flying through space and drawn by John “Jock” McCail was The Man of Steel.


These two very significant strips,in my opinion,ushered in the British Golden Age.


There was only one little problem.  Across the English [or French] Channel,a little twerp with a silly moustache started a “bit of a tiff” we know as World War Two.  Paper restrictions and the banning of imported goods such as comic books,meant that British publishers had to use whatever they could. Comics were printed on brown wrapping paper,silver paper[!] and other inferior stocks. Many comics simply vanished.  No new ongoing titles could be published so smaller publishers began to issue one-off eight pagers.

Oh, and as I've proven previously, the myth of the Germans "never had comics during the war" is just that. A myth. 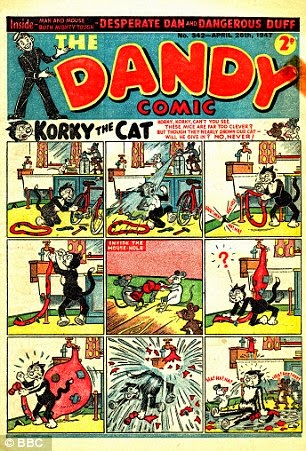 The best known publishers  remembered today are the Amalgamated Press and D.C.Thomson,at the latter not just Lord Snooty and his Gang but also Eggo and Desperate Dan took on the Germans. 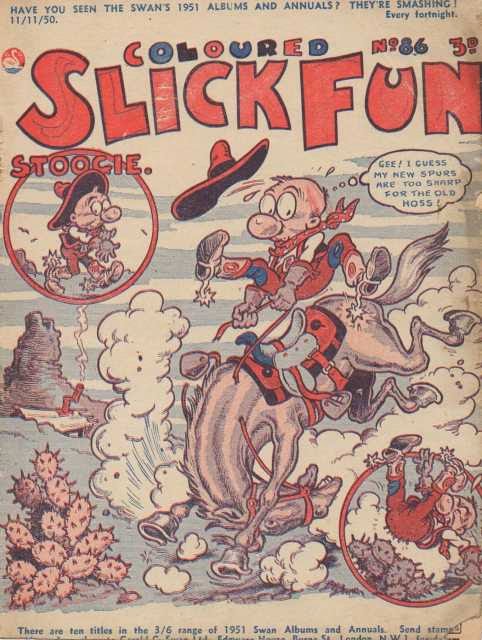 But Gerald G. Swan deserves a mention for books such as War Comics,Topical Funnies Special Autumn Number,Thrill Comics,and Slick Fun. .  Swan gave us Krakos the Egyptian and Robert Lovett:Back From The Dead. 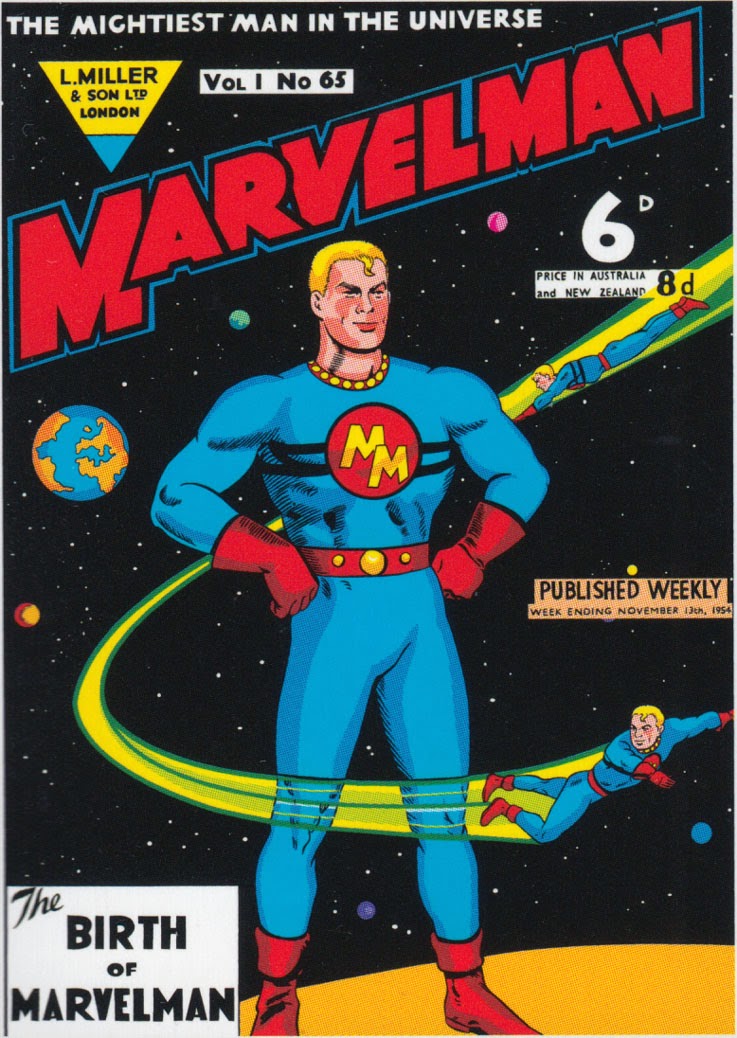 
However, there was soon to be a revolution.  Publishers started declining and the big companies continued on.  Then,on 14th  April,1950, ”launching British comics into the new Elizabethan Age,and the Space Age” appeared The Eagle,starring Dan Dare.  This date can be seen as the start of the Silver Age of British comics. 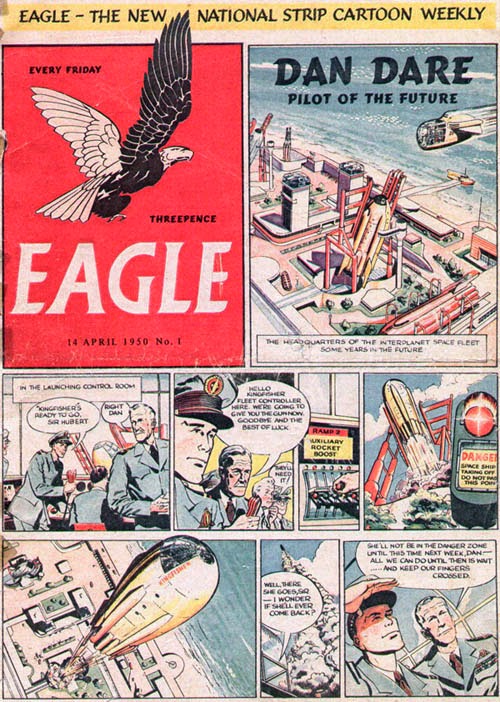 New characters would appear who would engrave themselves on the new generations of comic readers.


In the Amalgamated Press’  Lion no.1,23rd February,1952 Robot Archie made his debut.  In 1953,rivals D. C. Thomson featured General Jumbo in The Beano.  Miller, of course, brought us Marvelman and his family of comics.


More uniquely British characters followed and into the 1960s we saw “The House of Dollman”, ”The Spider”, ”Steel Claw”, ”Rubberman” appear.


In the mid –to- late 1970s titles began to get cancelled more and more frequently with Thomson and Fleetway/IPC seemingly not sure just where they were going comic –wise. In February,1977, 2000 AD made its debut and it was a pivotal point for British comics [not to mention for the US industry which later  recruited many of the talents involved to help its rapidly sinking comics in the mid-1980s.    And though some comics continued few survived.  Beano and Dandy continue but in much poorer form and British comics as an industry seem almost dead.


From all of this we can define the ages of British comics.