I have been posting this to my other blogs as it applies just as much to this one as the others.  Fandom IS dead. 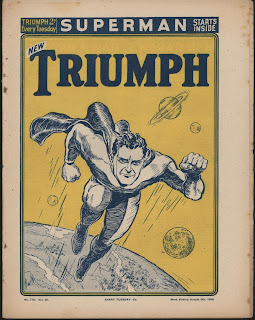 The first reason is that I can post for a year and there are no responses.  I may as well keep the information in my head.

The second is that readers do not see the trolling, name-calling and other obscenities that I get sent but tend to get to and delete before others see them.  These are not from fans but nasty little people with low IQs.

I just posted this over at Comic Bits Online as an example:

I run a couple of Face Book groups and the rules are  -it is made very clear- that they are designed to discuss certain aspects/publishers.  The rule has always been that it is not a selling site since a couple people before were ripped off and because I owned the groups I got not very happy members.

However, if a member checks with me before posting an item for sale I allow it.  So when Dan Dillon posted that he had some comics for sale straight onto the page I pointed out that he needed to check with me first.  His response was (I've censored bits):

Dan Dillon: Miserable old c**t no wonder this page is dead. I bet you get hard when you ban me

Of course, Dan is a coward and realised that I could report his post so what he did, without reading the response from me before posting this, was to leave the group.  You see, that way he would not see my response and he thought he would get away with it.

However, if you troll or post obscenities to any group I run simply because you tried to pull a fast one and not ask, as others do, "Can I post that I have these comics for sales?" and so I wonder how safe it would have been to allow his "for sale" post.

This is an almost daily if not weekly occurrence on the internet and I am guessing in this case that it was Dan who got "hard" (I'll give him the benefit of a doubt).

Yes, I do have the option of making a formal complaint against this person and his Face Book account but for now I am merely recording it.

Yes this does seem a rather nasty response from someone who broke very clear group rules.  It is, however, nothing new. As I have stated on CBO so often, there is no real fandom as such any more.  Yes, I am aware that there are comic book fans out there but they do not comment or respond to posts and do not really support blogs -five people saw the Dillon response but not one wrote supporting me on this matter. So I am closing the AC Face Book page.

This blog is here.  I will no lo0nger be allowing open comments and any made will be subject to Awaiting Approval.

I have tried and tried my best both here, on Face Book and on the Class Yahoo group to encourage fan discussion but it fails.  The negativity outweighs any support -well, no support.