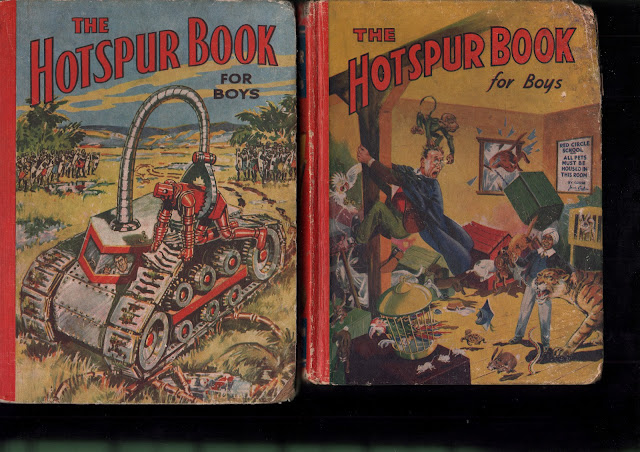 Above the 1949 book with the Iron Teacher on its cover and then the 1941  cover which is so full of action of the comical kind and drawn in a style I have always liked. 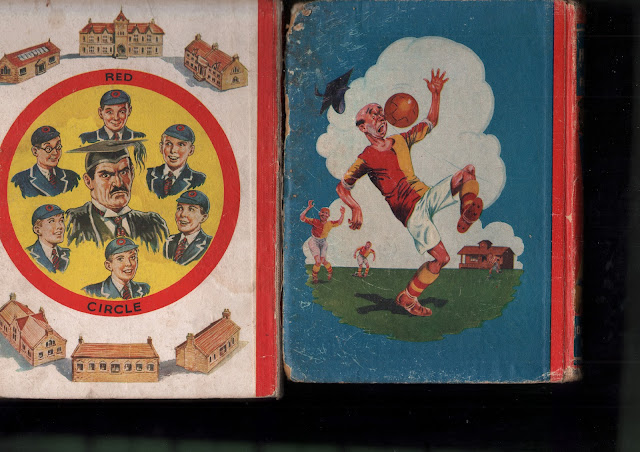 The other thing you will notice is that the 1941 book is that the 1941 book is 1.5 inches (3.5 cms) thick while the 1949 book is almost .75 inches or just under 2 cms thick. I know what some of you are thinking; there was a World War going on (as usual) and paper rationing was not so bad at the start so more pages and as paper rationing did not stop until the early 1960s the 1949 book had less pages.  Wrong.

Each book has 126pp (talk about time and relative dimensions in space!). The reason that the 1941 book is thicker is because the pages are not the usual slim pages but card. You see it in a lot of books of the period and it was probably the cheapest and best available paper stock at the time although some pre-war annuals/albums/books had thick paper pages.

The 1941 book was given to Willie Rich by Auntie Lily for "X Mas 1940" the 1949 book was the property of Cherry Gail Goad of Shirley "nr Birmingham". I like to see these things as it tells you someone did own them and you (well I do) wonder whether those kids who had the books at the start of the War made it through the period safely. 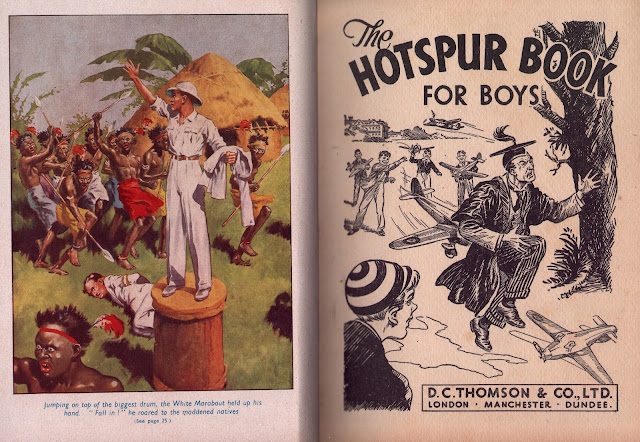 These books are all text with various black and white and colour illustrations throughout and no stripwork as The Hotspur was at that time an illustrated boys story paper and concentrating mainly on sport and the odd adventure story later on.
They are guaranteed 100% to put anyone who is "Woke" into intensive care for a full month. Boys getting the cane as punishment, dafty "natives" causing problems and the type of humour that you are not allowed to even think about these days. Historical perspective and "what we were like in the past" is strictly not allowed . 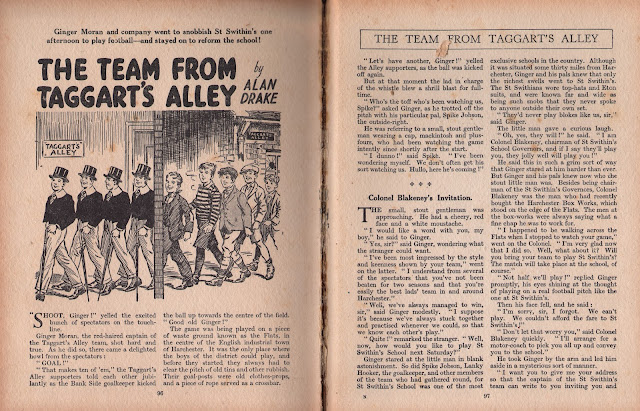 I am NOT going to make any "peck" or "pecker" jokes. Sometimes the pupils took their revenge on "the Head" or a teacher to teach him a lesson.  Here the lads have dressed up in hoods and gowns and bent a teacher over a desk while another prepares to "give him a damn good thrashing".  There is all kinds of wrong and kink in this...if you are a reactionary with a dirty mind. 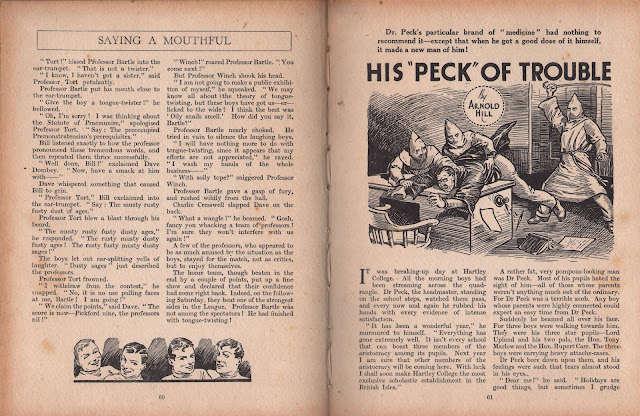 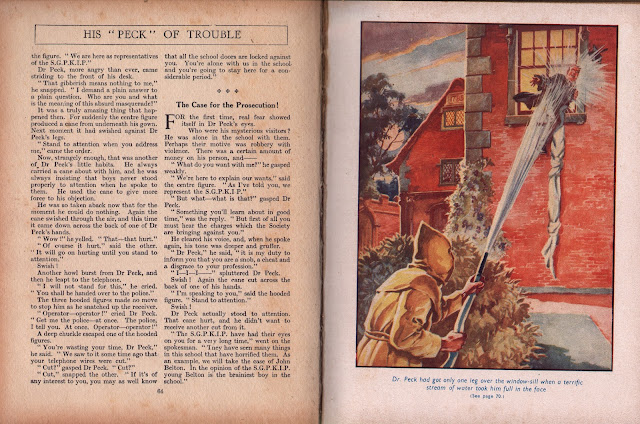 The above illustration ought to help ease the Woke breathing a little. This colour illustration shows that the boys were NOT wearing white hoods and gowns and going all KKK on us.
Then we have....OMG! No doubt body image campaigners are going to have to eat an extra doughnut to deal with this one -especially as they would be outraged by the image and not really have to read the story for an explanation. I could trend on Twitter! Right, another one of the fine colour illustrations and this time outrage because he struck the out-stretched hand "of the Hindu".  Firstly, at the time there was no separate India, Pakistan or Bangladesh so it cannot be seen as "racist" against any one country. The man was an Hindu. So story context is important. 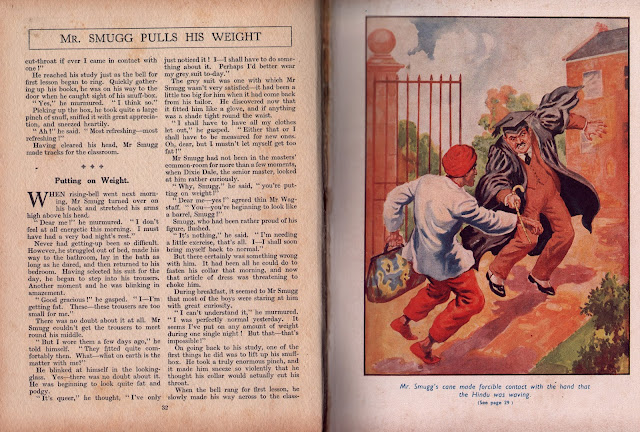 So how about 1949's Book? Well, firstly, the colour work was all gone barring the frontispiece but there were still the well drawn illustrations to break up all of the text. These really were books bought to get kids reading. 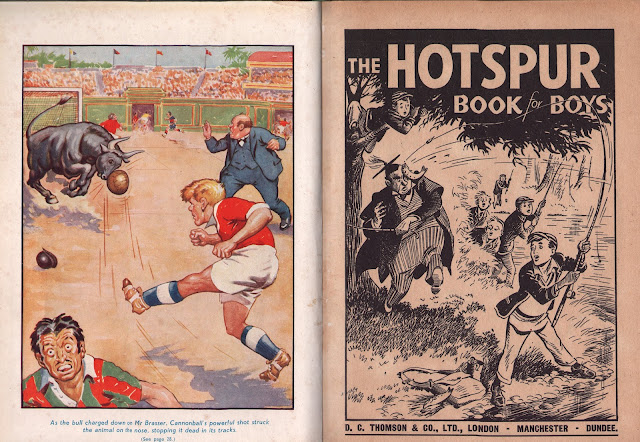 The football illustration looks nice but I love the black and white one which has the comedy as well as all the body movements drawn so well. Artists KNEW how to draw back then! 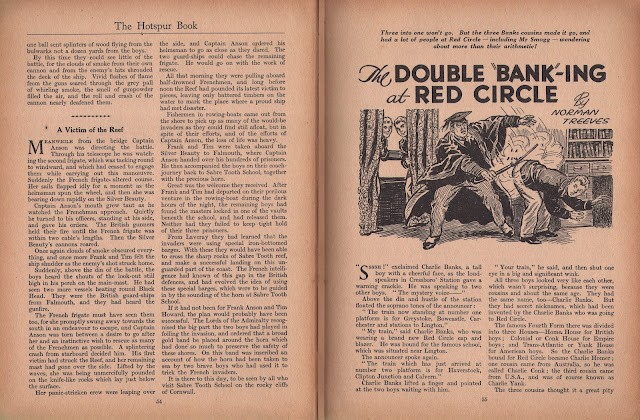 WHACKO! One thing consistent in the boys papers right up to comics of the 1980s is the number of ways boys tried to thwart getting the cane or slipper across the backside -books, magazines, pillows and even armour plating! 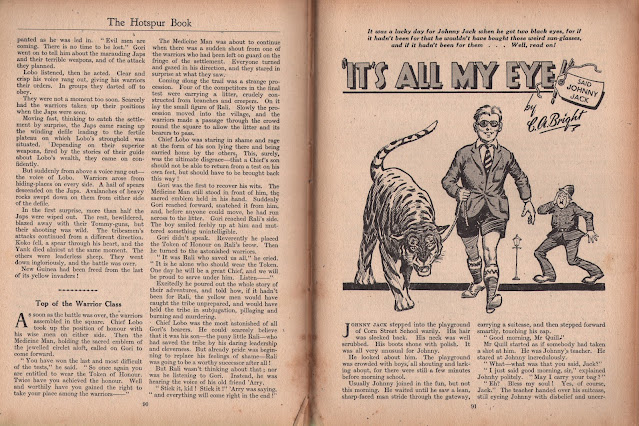 Above another "OMFG!" moment for the "sensitive" -another humorous story surrounding a boy with rather bad eye sight. Mr Magoo and Colonel Blink are better well known but this genre of story ran in TV, movies, comics, cartoons and much more even up to recent times (any modern examples receiving utter outrage in response! 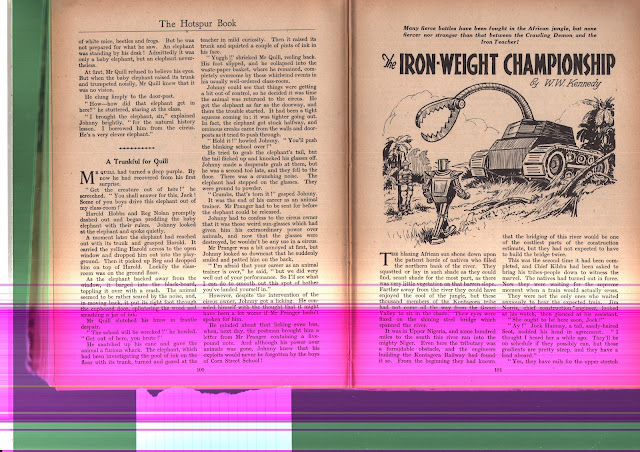 Above you will see why scanning things just are not a thing for me! However, that Iron Teacher illustration needed to ne included. This was before Thomson re-booted the character to become more R2D2 after the Star Wars movie. 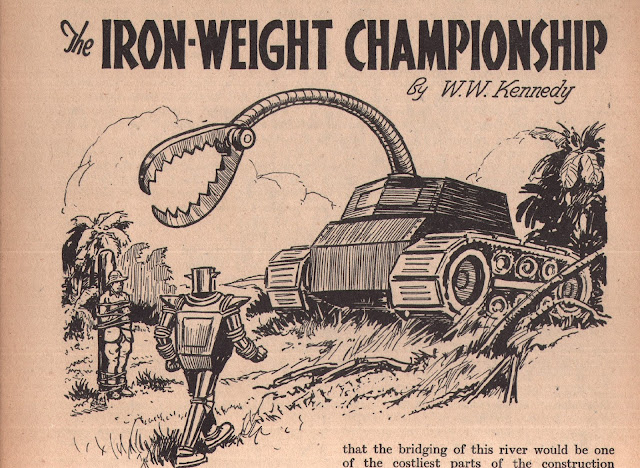 So much comic book and boys (and girls) papers history is forgotten or lost because of ignorance and modern trendiness. These books are fun and are well worth a read but not investment potential so remember that and do not get conned!
Posted by Terry Hooper-Scharf at 08:27