Derek has just informed me that the legendary Mick Anglo died on Oct 31st 2011, aged 96.  Born on the 19th June, 1916, Maurice Anglowitz, Mick later went on to be a mainstay of the home grown British comic industry reprinting French strips in English and exporting English strips to Europe. 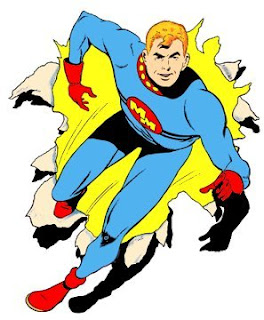 There can be little doubt that his most famous creation was Marvel Man –a character that replaced Fawcetts Captain Marvel reprints in his books.  So much has been written about the later history, its twists and turns, and all have taken focus off of what the strip was –FUN!  Hopefully he enjoyed some of the benefits of the sell off to Marvel Comics recently.

There is an interview by Derek and Roger Dicken in Alter Ego magazine #87.

Condolences go to his family.