If You Wonder WHO Cast Iron Chris Is You'll Ask WHAT Is The Iron Boy!!

When I first came across The Iron boy I chuckled.  However, as you do when you get older, I then started questioning the very concept.

The character is, of course, another one of those oddities from the Swan Comics stable. What do we know?

Who was the artist?  No idea. Again, that old problem of not signing work. Whoever it was he kept forgetting the ‘arms’ of the spectacles.  What is really needed are samples of strips that are signed and have this distinctive style.  Good luck with that! 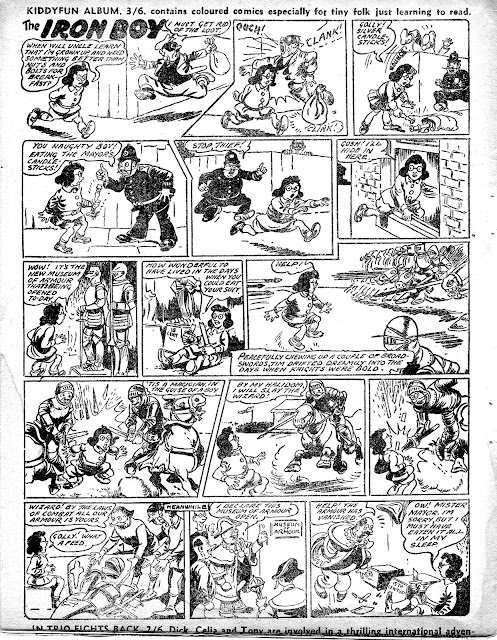 We know the series was contemporary so 1940s to early 1950s.  However, take a look at how this Swan marvel is dressed.  Almost girlish –almost medieval page boy but he is wandering around with no hassles.  Well, no hassles until it comes to metal.

You see, Tim –yes, The Iron Boy has a name!- was “Bred on a diet of tintacks and iron filings Tim was almost solid metal!” 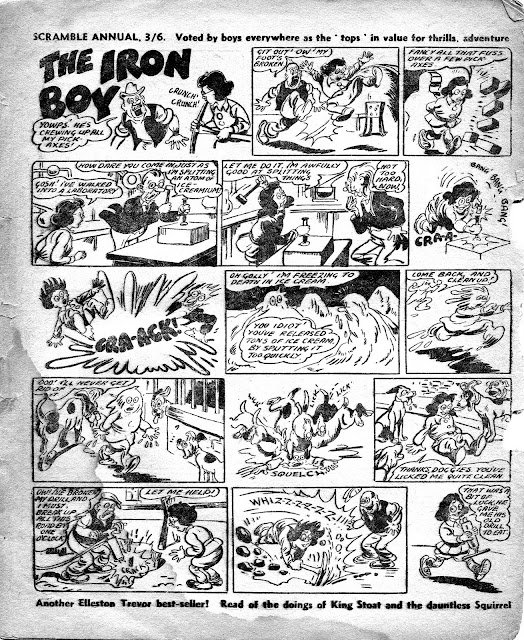 Okay, we’re back to that “suspension of disbelief” here.  Oh, like soggy pancakes I am!  Can you imagine a comic strip being published today in The Beano or The Dandy about a boy eating tin-tacks and metal filings??  National newspaper and TV outrage fuelled by some “concerned parent” (who probably feeds his/her kids on too much pizza and sweet food).

Who was it looking after Tim?  Well, we know he has an uncle.  He says so and reveals that this uncle only left him with steel flakes, nuts and bolt ‘salad’! In the strips reprinted in Black Tower Gold 6 Tim eats iron bars from a zoo cage, a roadworkers steel drill, suits of medieval armour –this just isn’t human!  But then, let’s look at some of his exploits.

He eats the iron bars from a tigers cage and the tiger bites into Tim’s head –and breaks teeth.

He can walk through solid brick walls and not notice.  He can dig a road up with a pick-axe at incredible speed.

He can fall from an aeroplane and land on an elephant and bruise it –he can also survive being thrown a distance by said elephant and land and knock out two full-grown lions!

In the death grasp of a python he can stretch and break free –tearing the python into three pieces!

Were Tim’s adventures after being dropped into Africa continued?

Anyone remember who was the fifteenth member to join DC comics Legion of Super Heroes in the 30th century?  Matter-Eater Lad who can eat and digest any substance without harm to himself.  Could it be….?  No, obviously not.  Besides, Tim eats metal almost exclusively. 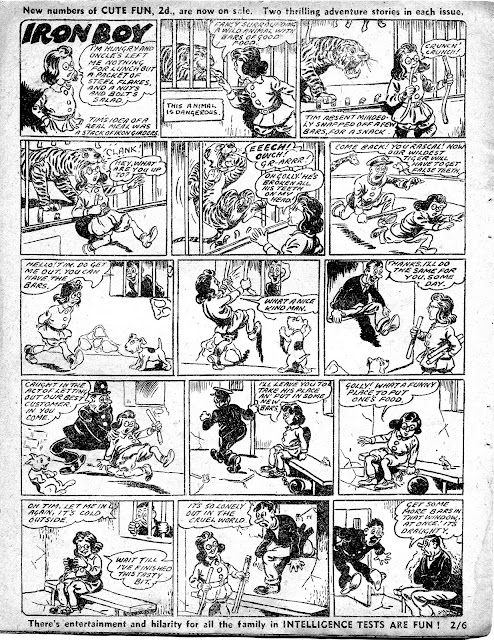 So, if he eats metal it must be used up for energy, right?  Certainly he is strong beyond the simple explanation of “being almost solid metal.”  Now, okay, he digests and burns up the metal for energy but there is a bi-product of eating that I need to delicately touch upon.

“Number twos”, “pooping”, “Potty crocodiles”…I could go on but I hope you get my meaning?  1940s plumbing being filled with “metallic waste” is not a good combination.  That said, in the period concerned you would never ever refer to “matters of the toilet” so it wasn’t a problem back then.  But today, oh we want an explanation.  Right, he does not produce “waste”.

In fact, for the character’s upcoming modern appearances I solve all these questions.  The answer lies with one of Black Towers oldest characters.  “Who?” you ask. Well, you’ll have to wait and see!

For all the disregard Gerald Swan later showed to his comics, his line of books and creators came up with some great oddities and The Iron Boy ranks amongst the top ten…closely followed by Ingy Roob! 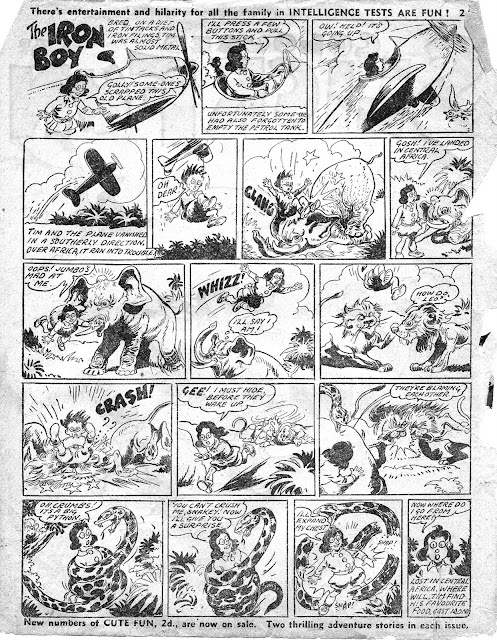 Posted by Terry Hooper-Scharf at 04:05