"When is the next UK Golden Age collection coming out?" 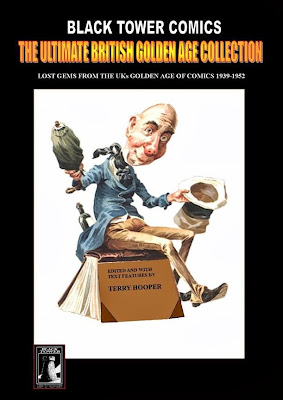 I have been asked several times now "When is the next UK Golden Age collection coming out?"

The answer is simple: Never. Though I should remember to "Never say never again".

Firstly, the collection (cover to the left...you see it?) is over 400 pages and quite simply does not sell. It's a work of love!  The strips in the book are so rare and the characters so obsolete that you will not find them anywhere else because no one cares.

Comickers go crazy for scans of old Beano or Dandy comics or even of Amalgamated Press comics or The Eagle and that's it.  I've been insulted by comic 'fans' for daring to even mention the publishers or titles because they are insignificant.

If we said that EVERY comic from the US Golden Age other than Timely or DC was ignored you GA comic fans will see what I mean.  In this case "It's not D. C. Thomson or Amalgamated Press!"  And then you get the asses who tell members of groups on the net "Oh, if you had a photocopier you could produce something just as good as these books"  Yeah, now that ass-wipe hid behind a pseudonym but I KNOW who he is because he filched as many UK GA scans off my groups as he could and has offered them all over the place as from "source unknown" (What the scan just appeared on his computer???)  or as his own work.  And you know what? I know for 100% certainty that he never ever purchased a copy of the individual issues.

Then you have the arse-cracks who write: "I don't like the humour strips. I don't think they are funny. I only want to see super hero strips!" and "If you continue to include humour strips I'm not buying."  Well, feck you. Because, I sold these books and I know again that these complainers NEVER purchased copies.  Then you have the "It's all black and white. No colour. I'd buy it if there were colour strips in the books!"

If any of you have checked out my GA blog -link to the right- you know the problems -orange, red, purple, blue, green and other awful ink colours that reproduce badly.  Now, had I included colour strips then the production cost is such that the Ultimate Collection would cost you over £100 a copy because even if there were only 10 colour pages out of 405 you are still charged the colour rate for EVERY page even if they are b&w!

Rarely I hear from someone who really appreciates the book. Brian "Bib" Edwards, creator of Captain Biplane and one of the minds behind the Braque comic, now in his 70s, wrote to say how much he enjoyed the collection and seeing strips from his youth he thought he would never see again.  That gives you a warm fuzzy feeling.

Black Tower has produced 100% more than anyone else on UK GA comics and strips and it is a LOT of work.

But it has not all ended.  Black Tower Super Heroes now includes a mix of old Golden and Silver Ages strips as well as new ones. And I ought really to say THANK YOU to the bosses at IPC Media who have been very kind.

I really do get encouraged by sales to produce more you know.

And if Ben Dilworth reads this take care of yourself, mate.