The Decision And Why. It Needs Explaining. 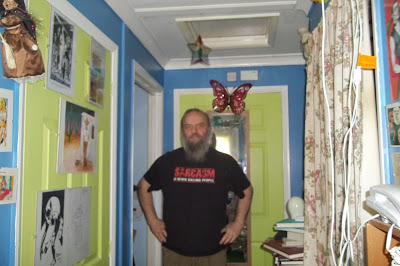 Firstly, I will make it clear that my severe financial problems have not gone away. They are here and I face them every day.  Nothing has changed there.

What has changed I will explain. I had a very long conversation and discussion with Frank Barrell on Friday and went over why I had made serious decisions lately regarding publishing.

All the lack of sales print outs from the online store were laid out. In fact, every printout covering 2010-2017 was laid out.

I will paraphrase Frank’s points.

I started publishing in 1984 though I was involved in printing in the 1970s and had even put together a school magazine (the story of that and why it was banned as well as my selling copies of Oz magazine can be found in my QRD interview).

1. When the school mag was banned did I give up and just say “well that’s it then”?

2. When I worked with small and later larger US Independent publishers and got ripped off or messed about did I quit?

3. When I invested more than a month tailoring Heroes Of India for Diamond Comics in India –almost 50 pages of art, colour samplers and covers- and they decided to drop the idea without telling me…the same thing another Indian publisher later did…did I quit?

4. When I put in weeks of work drawing horror/ghost stories and later, at the suggestion of a senior editor, put together a D-Gruppe sampler issue for Bastei Verlag who were then taken over by Egmont and all work in progress dropped without telling creators, did I quit?

6. When Fleetway cancelled projects I worked hard on and then never paid me the £5,00+ it owed me for scripts, did I quit?  When the two editors at Egmont did the same thing did I quit?

7. Marvel UK-same thing. Did I quit? (no mention was made of me holding a Marvel editor out of the window. Good)

8. Did I quit when the two best selling adult graphic novels I wrote were allowed (the publisher never even attempted to step in) to be illegally downloaded millions of times?

9. Did I quit when one artist after another who I had helped get into comics (when I was a creators representative) cold shouldered me?

10. When a lawyer from Defiant Comics threatened to sue me because my Black Tower logo (used since the 1970s) was similar to their logo (1993) did I just back down and quit or did I tell him I looked forward to seeing him in court and to **** off?   The answer to that is obvious.

11. When an idiot at IPC Media and their legal department threatening the full weight of Warner (who owned IPC then) if I did not stop using my own characters (seriously) and did not pay for using characters in Looking Glass, which was a project submitted to IPC a few years before, did I back off and quit? (same as with Defiant but I was on good terms with management at IPC and later Warner told me they had no idea any of this had been going on)

12. Did I back off and quite when a number of other such incidents occurred (I am not giving details here because the people involved are either no longer here (alive) or nothing to do with the companies today)?

At this point I have to say that points 13-20 involved personal events so I won’t go into those.

The obvious answer was “No” to each point.

Yes, I took the point that I have been without money before.  Yes, in the 1980s/early 1990s I did often go 4-6 days without food (note to youngsters: in those circumstances tomato ketchup in hot water tastes fine. I also lived on one cabbage for a week. Drink plenty of fluids and when you get food do NOT eat like crazy!! Small amounts only to start).

It was pointed out that with over 90 books over 9 pages on the online store it was stupid to just close it down.  There were also 10 other books prepared waiting publication.  And hundreds of pages of The Green Skies so was I seriously going to dump all that?

Frank then pointed out that Comic Bits gets thousands of views per day and has a truly world wide audience –more countries from  recently appearing in the stats, too.

I pointed out I still review books and the counter point was that “reviewing does not earn you money!”

I pointed out that a lot of genres were covered by  and these were in comics, comic albums and graphic novels –excluding the prose books.  Artists had turned in fantastic work but showing that on CBO had not resulted in sales –and I was told quitting meant those creators were being let down.

I pointed to the lack of sales and a few other things but the response was that I had never quit before despite major problems so why was I quitting now?

Paraphrasing again: “You are too ***** stubborn to quit.  You know that once this rough patch is over you’ll be like an express train again.  You think about it. Can you live with having quit?”

I get the point.  But, for the foreseeable future, what?   Yes, I will continue reviewing books as they arrive but beyond that--?

I was told that I needed to keep the idea of one day comic marts in  even if not before 2018.  Again, depending on how many people want to book tables to just sell comics because last time I mentioned this I got no real interest.

The look and design of the  comics and books?  No. The covers have nothing wrong with them and the quality of contents and printing are excellent. Black and white is the best and affordable option –one of the books at the store is £5,75 in black and white. In colour that same book would cost £12.00+ (and remember I only get a small percentage since the printer and Print On Demand company take sizeable cuts –I have no real say in pricing).

The quality of the books cannot be improved upon.  Maybe Mr Dilworth can think of a new jazzed up  log?

Apart from that I can only wait and see. Flow through the rough waters.

But I really do not like to quit.  I have seen so many small publishers vanish or meet their ends in the last two years. I’m not sure how but I’ll dig my feet in. I guess at my funeral someone is going to say “He was a stubborn sod. Never knew when to quit!” Until then I will be that old bearded man people point out but hope I never notice.

Posted by Terry Hooper-Scharf at 11:59