The Mystery of Madame Foretell 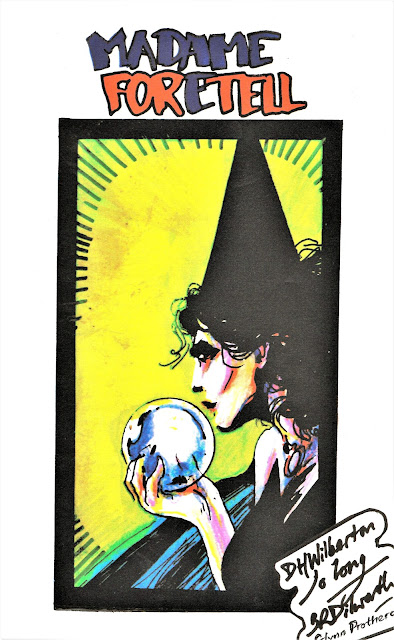 Glynn Protheroe created Madame Foretell -"Our Fatheaded Fortune Teller" for Gerald Swan and her page was basically a series of head-to-head gags. Pretty one-dimensional and for a long time I just put her aside and went with the original pages. However, I was building up a back story for the character in my mind.

In The Green Skies, Vol. II part 3 we see Madame Foretell appear out of nowhere to warn two characters of the coming danger before a transportation spell pulls her back home to "The Wizardry" in Sussex. There she is met by an old turban-wearing fellow she refers to as "Gally". 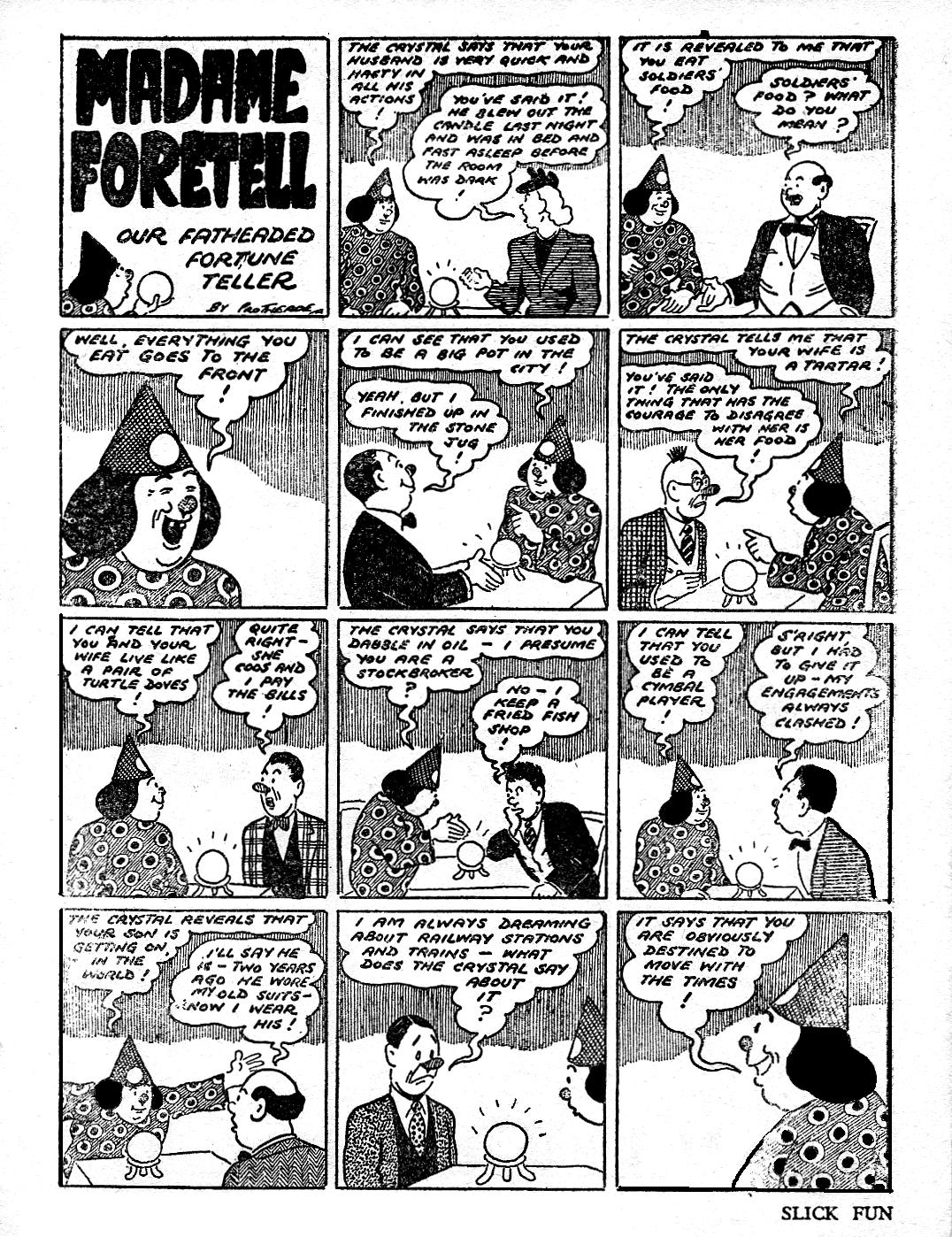 "Gally" is in fact a Second Level sorceror whom Fanshawe the Reality Check-Controller calls by the name of Gagamulasha. In fact earlier Gagamulasha revealed that Madame Foretell's first name is Glynnis. Gagamulasha and Glynnis are married (though don't ask me which church or sect).

We learn that Madame Foretell can use "magic" but to what extent we do not know though she is left behind when Gagamulasha leaves for the final confrontation at Arrana Comare (Plain of Tears) where only powerful members of the mystical community join the Reality Check Controllers. What happens after that..... 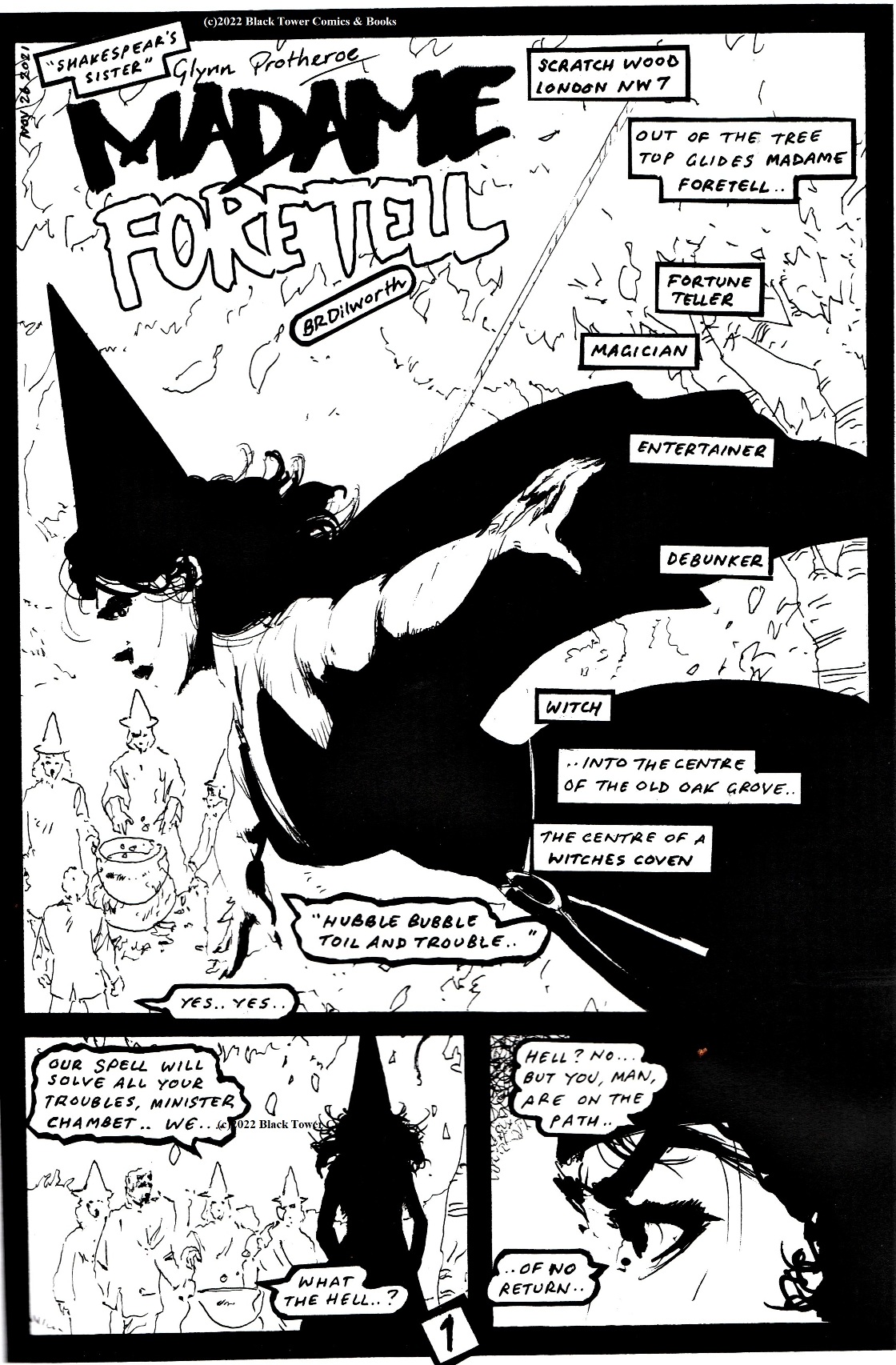 At some point later in her life Madame Foretell met the sorceror and that is a story for another comic!

But how did she end up for a period as some 'batty' (not all there) fortune-teller?

It was a question I was developing when a package arrived from Japan. After a lot of bowing and apologising for being unworthy the postman gave me the package. I opened up the envelope to see that Ben Dilworth had already produced some "Young Madame Foretell" strips and I thought "go with it".

So we now see Foretell when she was younger, possibly in th eerly 1930s -that raises other questions since she has obviously not changed since the Swan era (1940s/1950s) and 2021 and that is another story to tell (yes, there is one). It is this younger period that I hope to expand on in future.

Madame Foretell was literally a throw-away gag page and although I do not believe in "re-booting" characters I do believe in filling in their past and what made them into the people they became.

Keep popping by as you never know when something might appear. Looking into the future I can tell you it will not be tomorrow.

Posted by Terry Hooper-Scharf at 07:42