The following pages are from COMIC BITS no.5,Christmas,2004. 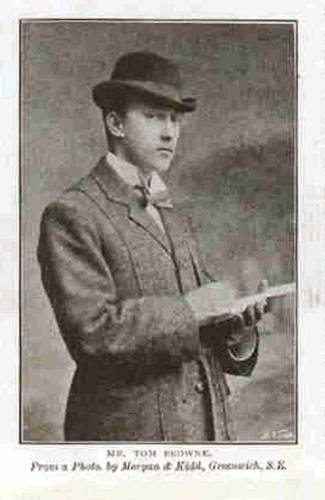 To many the name Tom Browne will mean nothing. And yet, he was the original master of British comic strip art. So, how can I ignore him in a publication dedicated to the Golden & Silver Ages of British comics?

Thomas Browne was "born of humble parentage", as the writers like to say, in the city of Nottingham, in 1870. There was a brief education, common in those days, until he was 12 years old at the St. Mary’s National School. Young Tom was then put out to carry hat boxes for a milliner. However, Tom was handy with a pencil and was apprenticed to a lithographer, which earned him the princely sum of one shilling a week -but that salary rose by 18 pence a year until he left in 1891.

Obviously, a young man needed more than that to live on and so, while an apprentice, Tom moonlighted as a freelance cartoonist for the London comics. The first eight-pager from the 18 year-old was titled "He Knew How To Do It" and was published in Henderson’s SCRAPS and one night’s work had earned him over six months wages -some thirty shillings!

As soon as his apprenticeship was over, young Tom moved to London where he intended to tackle the ha’penny comics and earn a real living.

Phil May was a brilliant cartoonist who took all the overloaded cross-hatching out of Victorian cartooning, as seen in periodicals such as PUNCH.  May was able to capture characterisations in a few smooth strokes, it was modern cartooning no doubt hated by the traditional illustrators!

Naturally, May was Tom’s favourite cartoonist. Tom applied the "May method" to his own work; crisp line work with carefully spotted areas of solid black.  This style was perfect for Harmsworth’s ha’penny comics: they consisted of cheap printing, low quality newsprint paper, Ill-etched blocks and cheap, near grey ink. Now you know why old comics were not designed to last! 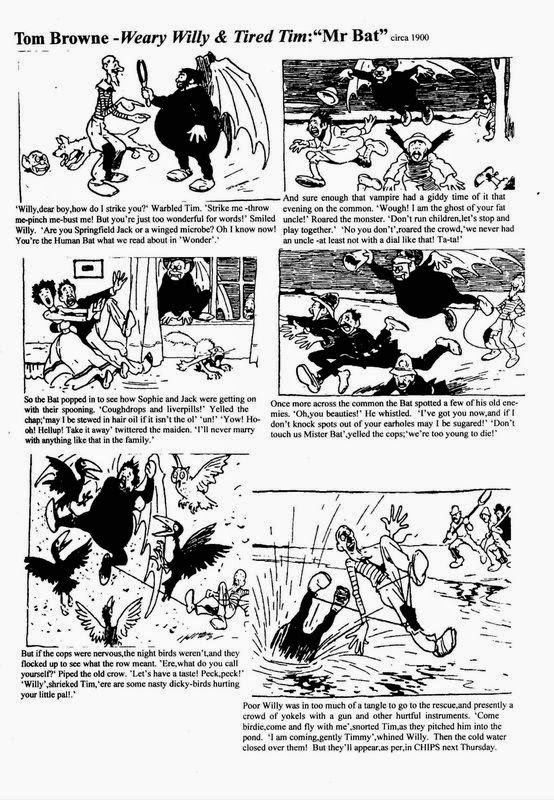 All of Tom’s early work were one-off sets, but slowly, over a period, the ideas crept in; the first being "Squashington Flats" in COMIC CUTS in 1895, but his greatest creations were soon to appear. Browne’s favourite fictional heroes were Don Quixote and Sancho Panza -and there was his inspiration!  On the front page of THE ILLUSTRATED CHIPS no. 298, 16th May, 1896, appeared a six panel picture strip entitled "Innocents On The River".  It featured two tramps, a thin one called Weary Waddles, and a rather stout chap called Tired Timmy.  Something about the pair clicked (rather like film funsters Laurel & Hardy years later) and editor G. H. Cantle called for more -how could Tom refuse?

The characters were re-named as "Weary Willy & Tired Tim" and their adventures continued for a staggering 60 years!  Only one other artist ever drew the dynamic trampsters; that was Percy Cocking who drew in Tom’s style but never once had his name credited (typical of British weekly comics).  Cocking’s run lasted 40 years until the pair retired to the plush mansion of Murgatroyd Mump, millionaire, in the last issue of CHIPS on 12th September, 1953.

The two tramps shot the circulation of CHIPS to 60,000 copies per week!

Obviously, this could not go unchallenged by other publishers. Tom was to create similar characters for many such as "Airy ‘Alf And Bouncing Billy" for THE BIG BUDGET, in 1897; "Lanky Larry And Bloated Bill" for COMIC HOME JOURNAL, in the same year and, in 1898, "Don Quixote de Tintogs" appeared in COMIC CUTS. Still a record in British comics, for six months Tom drew five front pages each of six panels every week! This increased his earnings to, for that period, an incredible £150 per weeks.

By 1900 the workload had tired Tom out and he left comics to do other things such as paintings, posters, postcards and in 1906 even went to the United States as cartoonist on the CHICAGO DAILY TRIBUNE.

For 50 years comic artists would imitate and emulate the "Browne style".  Rather like editors did years later with Dudley Watkins, during and after Tom’s time, artists were urged to draw "in the style of".

As Denis Gifford pointed out in THE INTERNATIONAL BOOK OF COMICS [1990]:~

"...his true living legacy may be seen in any
copy of almost any British comic." 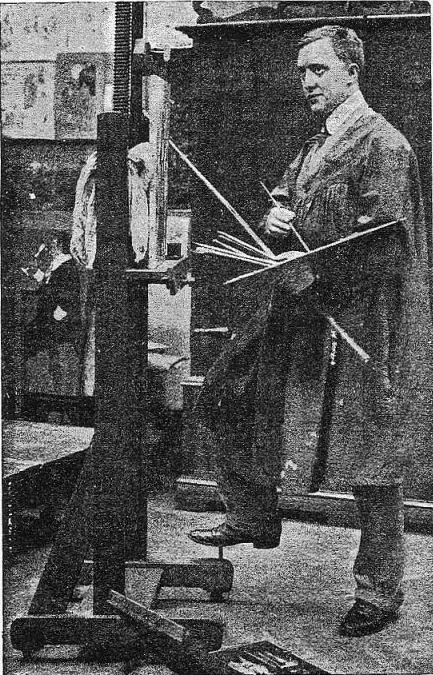 One has to wonder,had Browne lived to see the explosion of comics in the 1930s, just what might he have produced?  Perhaps somewhere, in a parallel dimension, he went on to even greater things!

And I posses a few of those Browne post cards and they are lovely! 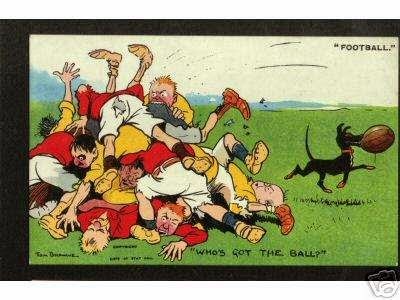 Posted by Terry Hooper-Scharf at 11:53