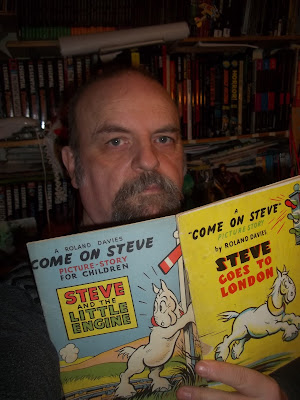 I have a couple of the Steve books but this old article needs airing while I still live!

Addenda on dating the Steve Colour books.  Bear Alley dates the Come On Steve books as "after the war" (World War 2) and also that the strip apeared in the Daily Express newspaper until 1939.  https://bearalley.blogspot.com/2009/04/lesser-known-art-of-roland-davies.html

Denis Gifford and others state the strip appeared in the Sunday Express.  Some have pointed to the books being from 1930 -Steve and the Little Engine in particular. Talk about time travel since the Sunday Express never picked up the strip until 1932. Rooke Books made this glaring error: https://www.rookebooks.com/product?prod_id=29787

The problem is that, unbelievably for a British publisher, neither the dust jacket to this paperback nor the interior carries any identification of publisher or date.

Now if -if- someone writing about the books has a copy then a rough date can be given. For inside the dust-jacket is a note for readers to check out the Come on Steve strip in the Sunday Dispatch and since the strip ran for 10 years after 1939 the books must have been published around 1948/1949. 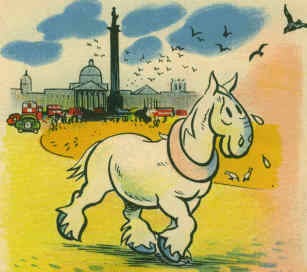 There is,for some of us,a fascination for early British comics and the characters/creators.  Ally Sloper and Steve The Horse I have tried to deal with on my Yahoo British Comic Books Archives group.
And,about five years ago I used pages of art sent to me by the late comic historian Denis Gifford to produce an A5 tribute publication to Roland Davies creation,Steve The Horse –“Come On Steve”. 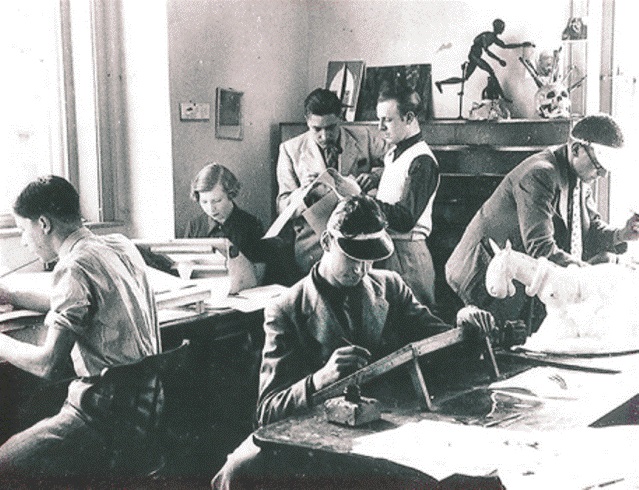 above:Roland Davies Studio.  Davies is in the cardigan and Steve statue to right
I knew Davies had been involved in animation and had produced features.  However,I guessed that I’d never see these as buying 9.5mm 1930s film seemed like a fantasy.
Until,quite by accident,I was looking for more Davies info when I came across a site run by Grahame L. Newnham and well worth checking out if you have an interest in Pathe or other old films: 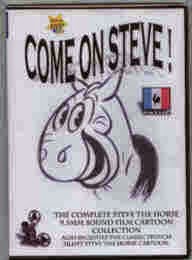 www.pathefilm.freeserve.co.uk
I couldn’t believe my eyes when I was an advertisement of Newnham’s for “Come On Steve!”—a complete collection of the character’s animated features on a DVD.  And the price was perfect!
Sadly,ill health put all idea of buying a DVD out of my mind. However,when I recovered and realised that I hadn’t ordered it -I did!
The disc includes:
Steve’s Treasure Hunt  [1936]
Steve Steps Out       [1936]
Steve Of The River  [1937]
Cinderella Steve   [1937]
Steve In
Bohemia  [1937]
Steve’s Cannon Crackers  [1937]
Bal Costume [French Silent version] 1937.

With a wonderfully vintage sound track it might be that some would find, in these somewhat ridiculously over the top politically correct times,Steve Of The River a little “racist” in its depiction of African natives.  But I am totally opposed to retro censorship of historical images [such as using computers to remove the cigar from the mouth of engineer Isambard Kingdom Brunel!]. This was the 1930s and the truth is that not everyone was racist!  This was the easiest way for a cartoonist to depict natives in a comical film.
So be warned!
The quality for 70+ year old films is great.  I loved some of the wacky scenes featuring things such as a police gyrocopter!
If you don’t like black and white animation then it’s not for you.  But if you have any interesting the history of British comics,the creators and animation you’ll LOVE this! And Grahame included some nice info fact sheets with background and all for £9.95 + 75p p&p!
Check out the website and contact Grahame for current price in case it’s altered. You won’t be sorry in adding this to your DVD animation collection!
But there is an up-date to this.  After reading the above article,Patti Brown contacted me to see whether I could help her identify a Steve The Horse statuette?  I thought that it must be the studio piece [see photo above].
That idea was quickly shot down.  This was much smaller -you can see it below next to a 50 pence piece.  There is no makers stamp or any other information.  Only one thing is certain,though,the quality and glaze means it was a professional piece rather than a one-off a fan made.

And there is absolutely no doubt that this is Steve The Horse! 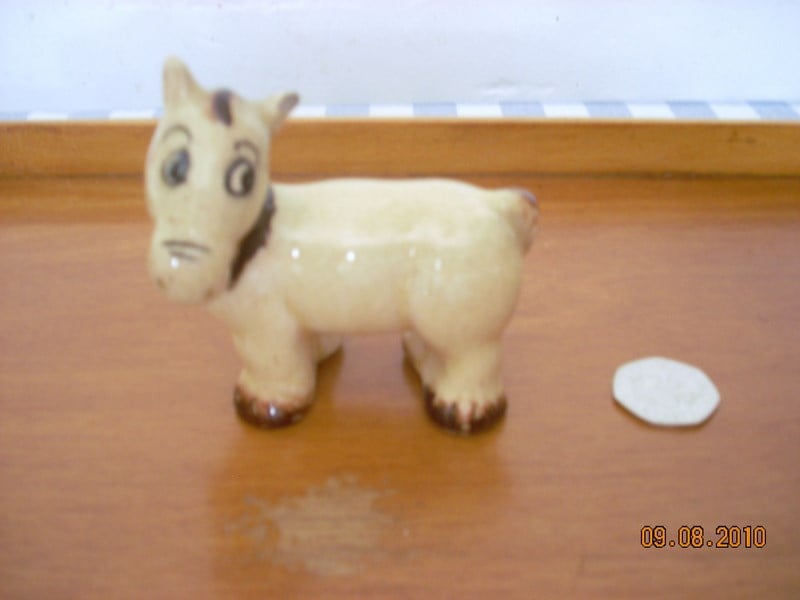 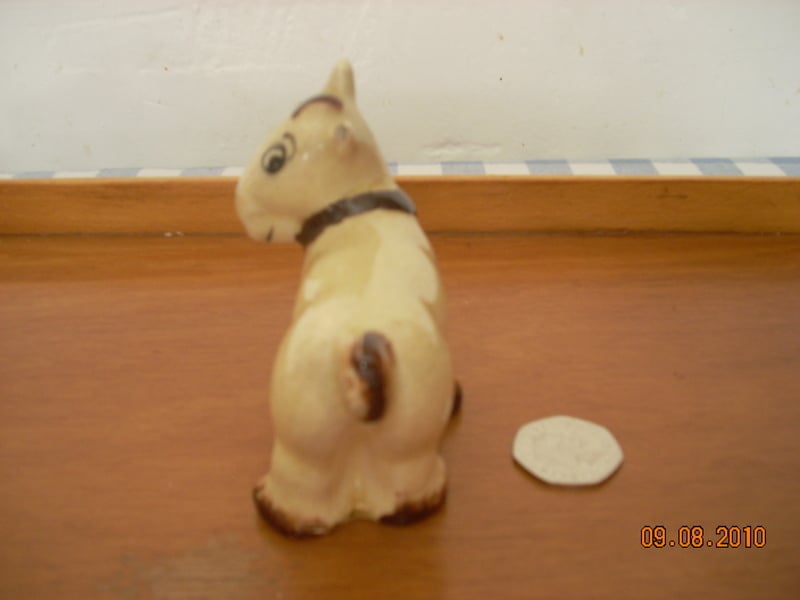 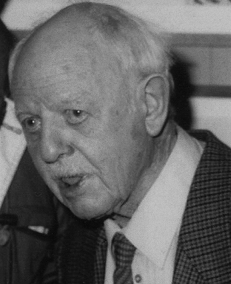 above:Roland Davies a few months before his death.
Denis Gifford wrote a wonderful obituary for Davieswhich I include below for those interested in the greats of the British Golden Age of comics:

ROLAND DAVIES was the epitome of the commercial artist, never happy unless he was drawing or painting. His long career covered sports cartoons, topical cartoons, strip cartoons, animated cartoons, children’s books and boys’ weeklies, and towards the end superb paintings which were sold in art galleries to collectors who never knew of his once famous comic horse, ‘Steve’.

Davies was born at Stourport, Worcestershire, in 1904. His father, a Welsh musician, was a conductor of theatre orchestras with an eye for art. ‘He always encouraged me as a boy,’ recalled Roland, ‘by ruling in the horizon line, which taught me perspective.’ Settling in Ipswich, the boy studied at the Art School there during the evenings, then at 16 spent two years as a full-time student before becoming apprenticed to a lithographer. Here he designed cinema posters and one for the Metropolitan Railway of which he was particularly proud. His obsession with speed, whether by aeroplane, train, racing car or motor-cycle, led him to freelance cartoons to Autocar and Motor Cycle magazines, and when a new weekly, Modern Boy, was launched in 1928 he found a regular home illustrating action stories and supplying wonderful two- colour covers depicting roaring motors and zooming planes.

Curiously, his greatest success came with the very antithesis of all this speed: a lumbering, genial old cart-horse in a weekly strip cartoon called ‘Come On, Steve]’ – the inspired title was the cry that sprang from a thousand racegoers’ throats as the jockey Steve Donoghue galloped to yet another win. Davies took his sample strips – devised over a weekend – down Fleet Street, trying first the Evening News, then the Evening Standard, then the Daily Express. Arthur Christiansen, showing the editorial acumen for which he became famous, took the strip to his editor on the Sunday Express, and the following week, on 6 March 1932, Steve made his top-of-the-page debut. Davies was pounds 4 a week richer, a fee that was shortly doubled.
‘Come On, Steve’ was soon so popular that Davies conceived the idea of animating the old carthorse. Buying a stop-frame cine camera for 18 shillings, he set up a studio in his kitchen and spent seven months making a short animated cartoon. Although full of faults, the film when projected gave him the thrill of his lifetime. ‘The biggest thrill in the world was to see my drawings move, even if I had got the speed all wrong, and Steve looked as though he was floating,’ Davies remembered. In his ignorance he had placed his cel-pegs at the top of his camera rostrum instead of the bottom, causing all kinds of odd distortions. ‘Well, I learnt animation from a three-page chapter in an old book,’ he said. 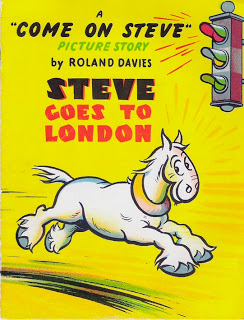 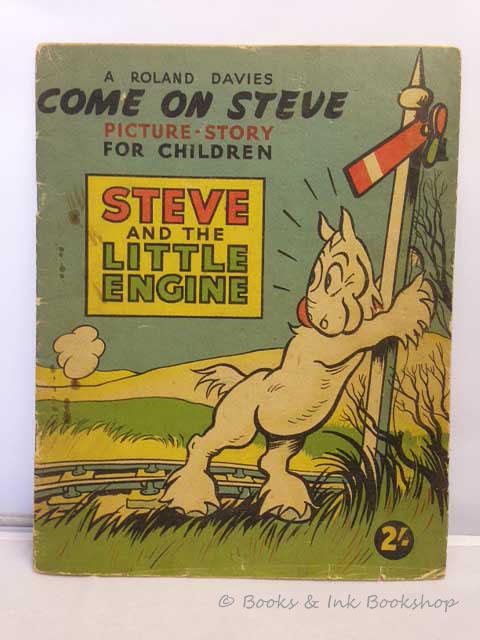 Above: Two of my little treasures published by Perry Books around 1949/1950 -the books are undated so it makes things difficult but since Davies Steve strip ended c 1949 and he retained his copyright a rough guess at date is made.
______________________________________________
However, he had the nerve to show his film to John Woolf of General Film Distributors. Woolf would not give a decision until a soundtrack was added. Davies hired a studio, improvised a track – and was turned down yet again. He lowered his sights and showed his film to Butcher’s, a minor distributor of B-pictures. They promptly gave him a contract for six eight-minute cartoons at pounds 800 each. With finance from his father-in-law, Davies set up an animation studio in Ipswich, staffed by students from the Art School and headed by one professional animator, the young Carl Giles.


One by one the six cartoons were made, this time complete with a signature tune composed by John Reynders, whose orchestra supplied the music track and sound effects. Steve Steps Out was the first, released in December 1936, and a children’s book-of-the-film was published by Collins. Best was Steve of The River (1937), a burlesque of Edgar Wallace’s recent film, Sanders of the River.
When the Sunday Express dropped Steve in 1939 Davies, who had wisely retained the copyright, took the strip over to the Sunday Dispatch. They snapped up Steve with glee, and soon gave Davies the added post of cartoonist. He supplied topical comment in a large weekly drawing, using the pen-name of ‘Rod’. After 10 years in the Dispatch, Steve moved into children’s books, and Davies wrote and drew a full-colour series for Perry’s Colourprints, plus a run of the Come On Steve Annual.
Davies’s work for children’s comics began in 1933 when he
drew the cover for the Daily Express Children’s Own, a Saturday supplement starring ‘Larry Leopard’. When DC Thomson’s new comic Beano began in July 1938, Davies drew a tough-guy sheriff, ‘Whoopee Hank’, and ‘Contrary Mary the Moke’, a long-eared donkey who was clearly a close relation to Steve. But his mainline comic work started in 1949 with the weekly serial of ‘Sexton Blake’, the famous boys’ paper detective, in Knockout. For TV Comic he depicted the children’s hour detectives ‘Norman and Henry Bones’, and created the sci-fi superhero ‘Red Ray the Space Ray-nger’ complete with club and badge.

He drew ‘Dixon of Dock Green’ in Swift, ‘Wyatt Earp’, the western television series, and a string of Walt Disney characters (Jungle Book, Peter Pan, Winnie the Pooh) in Disneyland. He even drew the adventures of ‘Woppit’, Donald Campbell’s mascot, in Robin. This linked back to his old speed-mania, and he wrote and illustrated several books such as The Daily Mail Speedway Book (1949) and The Ace Book of Speed (1952).

The continuing pressure of strip art finally grew too much for him, and in his seventies Davies turned to painting. Under the guidance of a publisher turned art dealer, Alan Class, he began producing dramatic seascapes and colourful Parisian street scenes, which found their way into several good galleries. 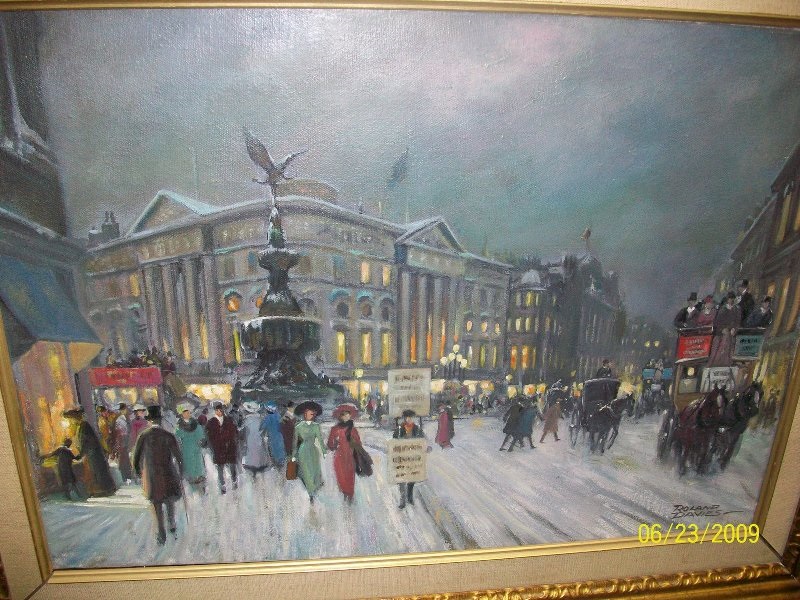