My brother and his partner are looking into the family history. As you might expect from Hoopers and Cases there are a few mysteries and odd goings on. However I was then told that there was an Olive Diamond related to my grandfather and that she was listed as "Childrens paper editor" -in the 1930s. She also lived in Bath.

I laughed and said that the only Childrens papers (comics) company I knew was Henry Louis Diamond who ran Target Publications from Bath.

Thought no more until I was informed that Iwas in fact related to Henry Louis Diamond! I got far too excited for a man of my age. Double and triple checked the documents supplied and, yes, it is true.

So, I guess comics editing, writing, drawing and getting ripped off by publishers is in the DNA.

I own some old Target publications and...well. I am chuffed but sadly never met the old boy who died in 1966 when I was still a youngster but a comic reading and drawing strips in old books.

Henry Louis Diamond was a British comic artist, editor and publisher, who ran Target Publications in Bath. As a publisher he launched various comic magazines, including The Rattler, The Dazzler, Chuckler, Target, Rocket, Sunshine, The Bouncer and Ovaltiney's Own Comic. These were vital for offering various British comic artists career opportunities throughout the 1930s. But Diamond was also a rare example of a comic publisher who also wrote and drew for his own comic series and magazines.

Early life and careerHenry Louis Diamond was born in 1904 in Bristol. His father was an iron moulder. Diamond's graphic career took off as a postcard designer. He worked for newspaper The Daily Herald and made his first comic strips for the magazines published by Fleetway Press from 1924 on. Among his earliest features were 'Sweet Hortense' (1924) in The Monster Comic and 'High Jinks at High School' (1924) on the front-page of The Golden Penny Comic. This was replaced in 1927 by 'Pot T. Pot and his Pet Patient, Piecan' (1927-1928), an oddball strip about an asylum keeper and an escaped lunatic. From 1926 on he also worked for the Amalgamated Press, drawing 'Ginjor the Turk' (1926) and 'Rose Budd' (1926) for Butterfly, and 'The Tomboy Two' (1926) and 'Wild West Wally' (1926) for Comic Cuts. 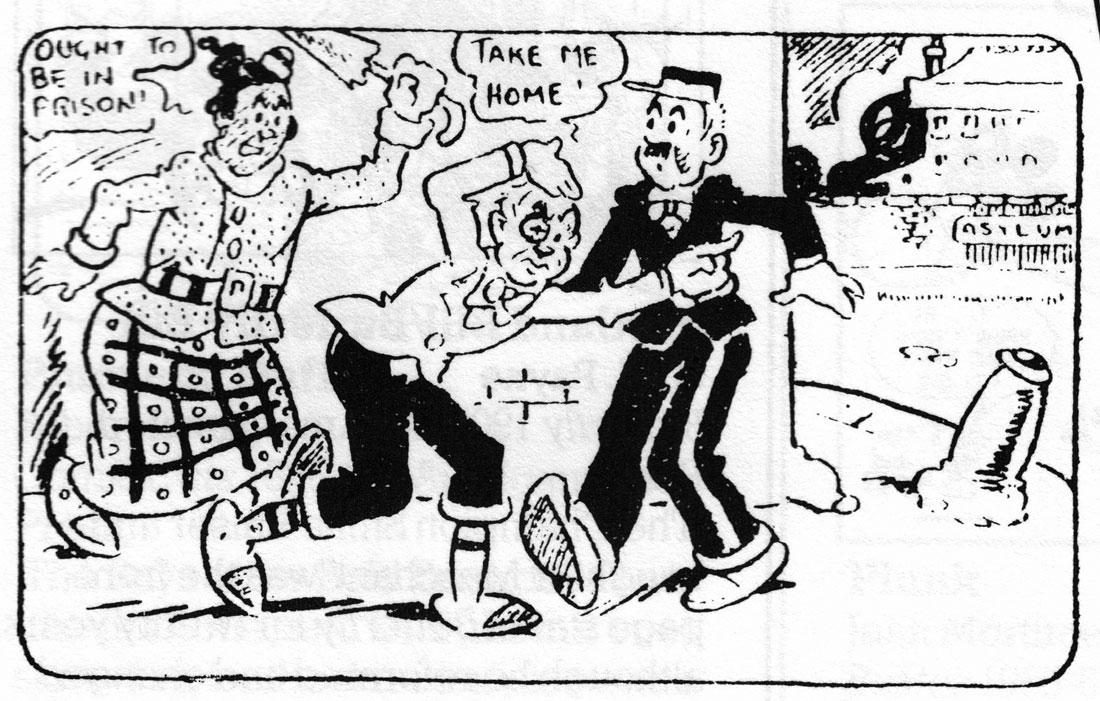 Provincial ComicsIn the 1930s he briefly drew picture strips like 'Oswald the Odd Job Man' (1931) for DC Thomson's illustrated boys' magazine The Rover, but was mostly involved in magazines published by the smaller publishing firm Provincial Comics, ran by Jack Long in Bath from 1931. Diamond drew the title comic 'Mickey Midge the Merry Midget' (1931) for the front-page of The Merry Midget. For that year's Christmas issue, Diamond drew himself and the magazine's staff as characters within the story. Diamond also drew 'Alfie, Auntie and Annabel' for Provincial's The Sparkler (not by be confused by the Amalgamated Press title of the same name, which started in 1934). Diamond eventually also served as editor on these titles, although Provincial already went out of business after a couple of months.

Target PublicationsDiamond subsequently turned to publishing, starting with the weekly story libraries CID (Crime, Intrigue, Detection) (December 1932-July 1933) and Target Library (March-August 1933). In 1933 he established his own comics publishing company, Target Publications, in Bath's Lower Weston suburb. Diamond's former colleague from Provincial, Bert Hill, became one of his lead artists. Besides Hill and Diamond himself, Target's artist team consisted of S.K. Perkins, Harry Banger and G. Larkman. The magazines were worth their money, as they contained 12 to 16 pages, compared to the 8 pages of the Amalgamated Press titles. 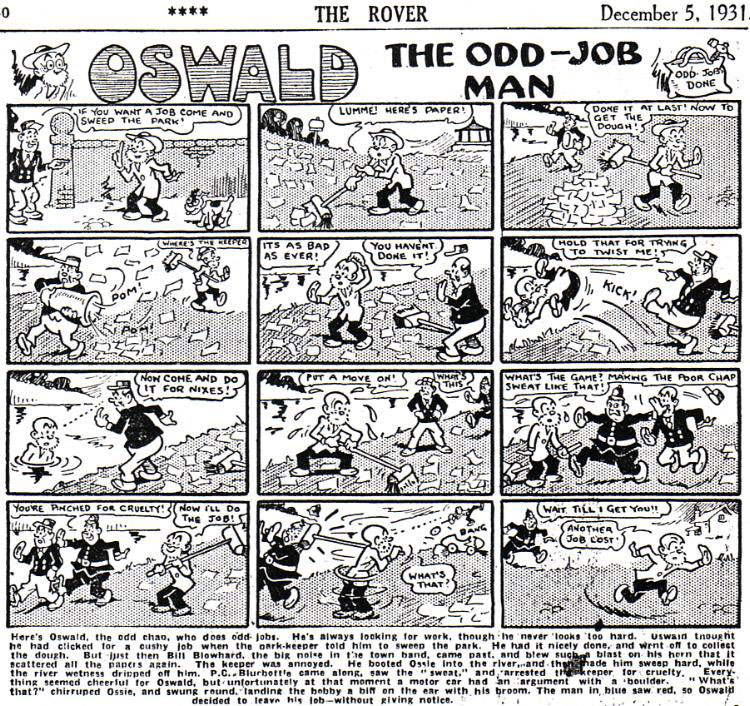 Target's magazinesOver the decade, Target launched numerous magazines. August 1933 saw the publication of The Rattler (on pink paper) and The Dazzler (on yellow paper). Both comics ran 294 issues. Chuckler (on orange paper) hit the market in 1934, for which Diamond drew the characters 'Sammy Smile' (1934) and 'Harry Coe, Our Has Been' (1936) before Bert Hill took them over. In 1935 he published Target and drew the first issue entirely by himself. This included the feature 'Tom Tip and Tim Top the Tricky Toddlers', which was also taken over by Bert Hill from issue #2 on. The same year Rocket was launched as well. Diamond was also the man behind the Ovaltiney's Own Comic (1936-1939), a giveaway supplement magazine based on Harry Hemsley's popular radio show 'The Ovaltineys', which came with Rattler, Dazzler, Chuckler and Rocket. The latter featured Diamond's 'Bertie Bounce the Bonny Bounder' (1935-1939), a cheerful chap with big bow tie and little bowler hat. In 1938 Sunshine appeared in print, followed by The Bouncer (sixteen pages for a penny) in 1939. The Bouncer ran Diamond's own dramatic picture story 'Pauline's Peril'. Those efforts didn't last long, because in April 1939 Target Publications was bought out by the Amalgamated Press, who incorporated Dazzler, Sunshine and The Bouncer into Golden, Jingles and Jolly comics.

Later comics workH. Louis Diamond was allegedly promised an editorial post at AP, but this never happened. He then returned to freelancing, and supplied Amalgamated Press titles like Crackers and Jester with artwork, including the feature 'Buster Button'. During the war he worked for the Admiralty at Lansdown, Bath, while making his first adventure strips for publisher A. Soloway, such as 'Caleb King's Mine' (1943) in Comic Capers. In the post-war period he served as editor for the comic titles produced by Martin & Reid, such as Jolly Western, and contributed to mostly smaller publishers until the early 1950s. Diamond for instance worked on celebrity comic strips for Fizz Comics (1949), the comic book edited by Denis Gifford and Bob Monkhouse. One of Diamond's final comic strips was 'Happy Hal' in Mick Anglo's British superhero comic 'Wonderman', published by Paget Publications. He additionally worked as an Income Tax officer. Henry Louis Diamond passed away in 1966, at the age of 62. 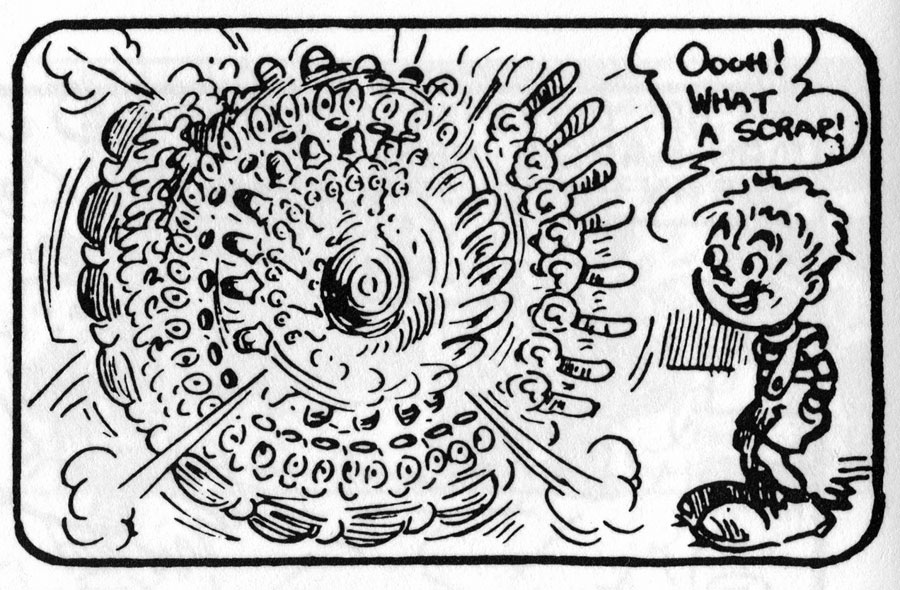 Posted by Terry Hooper-Scharf at 14:42