interior of the old printing works of William Walker 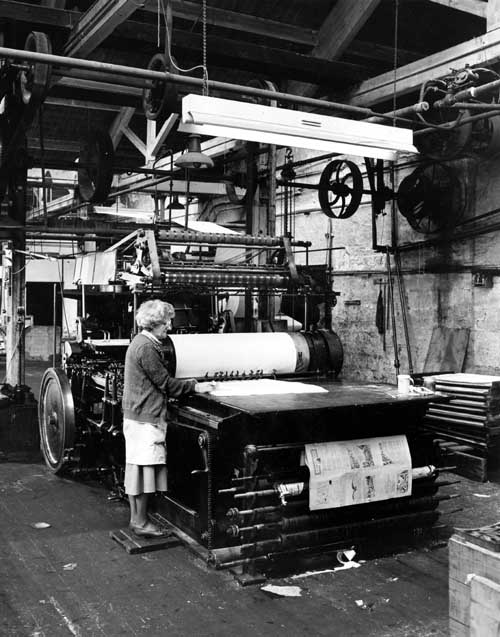 1988 View of the interior of the old printing works of William Walker printers of the Wharfedale and Airedale Observer, before they closed down and the business moved to a new office in Boroughgate with modern printing equipment. This printing machine would have been built in Otley, which pioneered the printing machine industry from the mid-19th century.

Back in the early 70s I worked as a compositor, at William Walkers in Otley, they were in the main street. with a pub either side of the entrance into the backyard. A general printer and also printers and publishers of the Wharfedale Observer series of papers. They were a very old fashioned company even then,machines were driven by belts running from a shared power source, the typecasting machines had gas crucibles, rather than the more modern electric onesthat every other printer then had.
They used to print 'magic painting', tracing and other toy books, with the little lad (striding across the globe, with a teddy orbook in his hand) logo on the back. They had hundreds of thousands of magic painting books in stock, unfortunately, it was a very old damp warehouse,and virtually all of the colours had run, making them worthless, but nobody seemed to mind. The boss's son, who was in his late fifties whould have preferedto be a pig farmer, so he did not have much interest in how things were being run. His dad, Ray Renwick, was in his early nineties, but he came in mostdays to see how things were going on.
The composing room was on the top floor, and when things were quiet, we used to play a version of indoor cricket, using a slip galley and a rolled up ball of paper. One of us used to be stationed around the corner, near the lift, pretending to cut up lead spacing materials onthe antiquated electric saw. If Ray emerged from the lift, it would take him a minute or two to shuffle the 25 to 30 yards to the comp room. When he passed,the lookout would pull on a piece of string, that ran around the wall, into the comp room, where it was attached to a couple of empty tin cans, alerting the'cricketers'. When Ray eventually reached the comp room, he found a hive of industrious activity.
I started there in January 1971, when there was quite a lot of snow, another game we played, I think during evening overtime, when we had a short break, involved one person standing out on the street, he would give a signal, and half a dozen or so of us, stationed in the back yard, would launch snowballs over the roof onto unsuspecting pedestrians in the main street.
In the 80s or 90s the office entrance and shopfront featured in Emerdale, as the 'Otten Observer', where 'Amos Brierley' was one of the local community reporters. I was only there for about six weeks, once the overtime ran out I found a job back in Leeds, but it was a rather different an interesting experience, that still gives me happy memories. I wonder if they are still there?