From Comic Bits no. 4 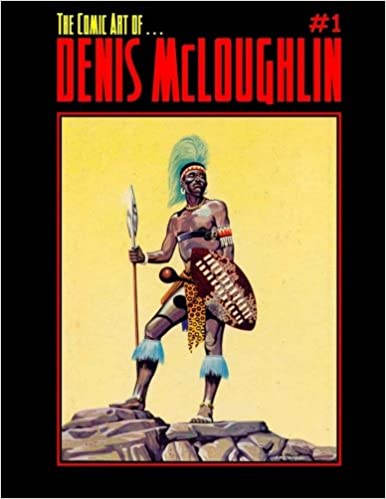 It is a great loss to those of us who remember the Gold and Silver Ages of British comics
when a true master of his art passes on. It is even sadder when that loss is through anything other than natural causes.

I had been in contact with Denis regarding an interview for Comic Bits no. 5 and he had promised to answer written questions sent to him as soon as he could. I needed to
contact him regarding photographs but attempts to speak to him by phone failed.
Then I received a phone call, not from Denis but a mutual contact. Denis was dead.

Apparently he had committed suicide by shooting himself (as far as we know:a Coroner’s Inquest has to take place). 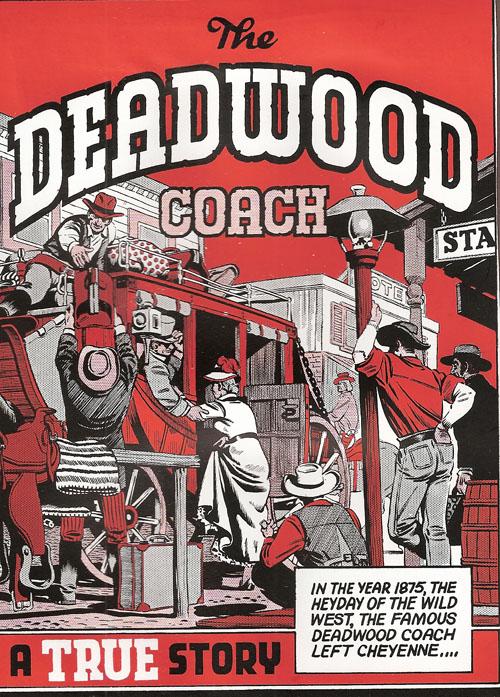 Rather than wait,I decided to run this tribute to Denis.

Born on the 15th April,1918, in Bolton, Lancashire (where he was still living at the time of his death). As a youngster, Denis was always interested in drawing and was greatly influenced by films, pulp magazines, American comic books and, like many others, by Alex ("FLASH GORDON") Raymond. While a teenager in the 1930s he began to collect the American TRUE DETECTIVE style magazines and pulps.

At 14,Denis attended the Bolton School of Art (now the Bolton College of Art) but left the same year to start work with the Ward & Copley Art Studios in Manchester. Denis continued at the Studio until January,1940, when lack of incoming business resulted in the 22 year old becoming unemployed -but not for long.

Denis received his call up for military service in March,1940,and served with the 101st Light Ant-aircraft [Ack-Ack] and Anti-Tank Regiment (later,1st Armoured Brigade). Rhino insignia painted on regimental vehicles, some 37 variously sized murals in military buildings and officers portraits at 5/- a time made him the unofficial regimental painter which made Army life a lot easier! 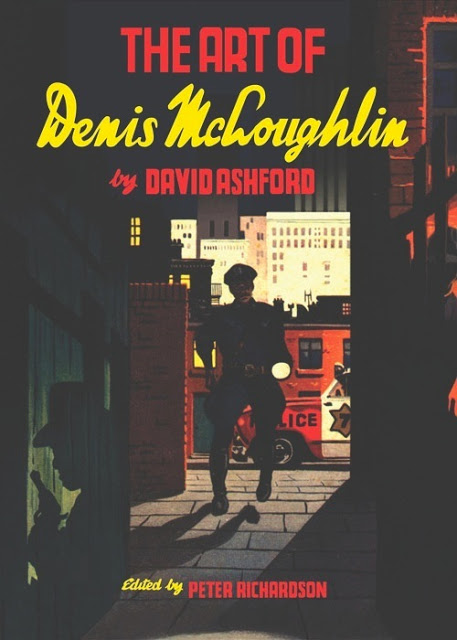 Wells, Gardner, Darton & Co. [London] offered Denis work painting book covers at five pounds a time and the first was for Frank Gruber’s NAVY COLT in 1943. When the company ran out of work they recommended him to T.V. Boardman;they had no work so passed him along to Australian owned Kangaroo Books.

Denis painted a few paperback covers for Kangaroo but his main work was writing and drawing cartoon gag books which earned him eighteen pounds each. He produced the first, LAUGHTER FOR THE HOME FRONT, by himself but soon collared his brother Colin, then 18 years old [b. 2/11/23], in to write and this partnership lasted well into the 1950s. The cartoon gag books they produced were: NEW LAUGHS FOR ALL, LAUGH WHILE YOU WORK, YOU’VE HAD IT and THIS IS IT.

It was while working for Kangaroo that Denis produced his first comic strip loosely based on the last stand of General George A. Custer for an un-numbered/un-dated issue of LIGHTNING COMIC. The strip was based on his rather vague memories of the Errol Flynn movie THEY DIED WITH THEIR BOOTS ON. If you are one of those completists who wants date of issue,etc., then you are unlucky. All we know is that the strip appeared in an issue between 1943 to January,1946!!

Following his demob in January,1946, Denis took up a three year book cover contract with T. V. Boardman. In 1947, however, Boardman Snr. Decided that the ban of imported comics left a gap his company could fill and McLoughlin was soon in the thick of it. Denis’ contribution to Boardman’s output led the late comic historian Denis Gifford to call him:"Boardman’s one-man art department"!

The 3d (or thrupenny) comics began in February,1948 and titles changed with each issue though the numbering throughout the series was consistent! Denis and Colin filled in the first seven issues with with the adventures of detective Roy Carson and adventurer and SF hero SWIFT MORGAN, alternately. The eighth issue saw the addition of the Swiss originated strip BUFFALO BILL but this was still re-packaged by Denis - who later drew BUFFALO BILL strips. Quality Comics BLACKHAWK and Eisner’s THE SPIRIT were added to the rotation of titles with Denis,of course,still re-packaging. 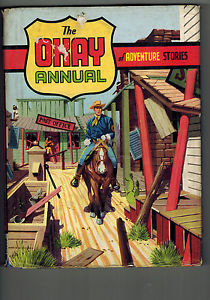 In late 1948 Denis partially withdrew from the cheaper comics following the introduction of the Christmas annuals under Boardman’s Popular Press line. To those overseas Readers who don’t know it should be pointed out that comic annuals were hardbound collections of strips, puzzles and other features that amounted to page counts of 130-150+pp. BUFFALO BILL’S WILD WEST ANNUAL was one of the most popular running fourteen years from 1948 - 1961 and offered a mix of US Quality comics reprints and original UK material by Denis and Colin.

After the first BUFFALO BILL’S WILD WEST ANNUAL,Denis had total creative control and each annual took over six months to produce. As the work progressed over the years so did Denis’s style and the annuals are regarded as some of the best Western material in comics history.

Denis also had complete creative control over the Adventure series of annuals. Covers rarely had anything to do with their contents which tended to be much more US originated material. ADVENTURE ANNUAL 1950 and NEW SPACEWAYS COMIC ANNUAL 1,1955, featured ROY CARSON and SWIFT MORGAN stories.

Excepting BUFFALO BILL’S WILD WEST ANNUAL,by the late 1950s Boardman comics were no more but Denis continued to produce book covers for Boardman up until 1967 when the company finally went belly-up -and as the British Silver Age of comics was in full bloom.

Denis helped produce four further Western annuals for Purnell Publishing,THE DAKOTAS ANNUAL 1963 and 1964 and GUNSMOKE ANNUAL (based on the TV series) 1965 and 1966.

In 1967, Denis began working for IPC and drew "SABER", a jungle adventure series and "BIG HIT SWIFT" a cricket strip for TIGER, even though he apparently detested cricket! From 20th March to 21st October,1971, he drew the brilliant "FURY’S FAMILY" for LION.

Pursuing his passion, Denis took two years off to compile his encyclopedia of the American Wild West titled WILD AND WOOLLY (Doubleday,1974). Despite the promises, once the book was completed no further work came from IPC - a very familiar story.

In 1974, however, D. C. Thomson & Co. Ltd, gave Denis comic work. Denis contributed to all of the DCT adventure comic titles such as WIZARD, CRUNCH, BUDDY, VICTOR, BULLET and SCOOP. In October,1977, WIZARD and BULLET featured five McLoughlin strips between them!

In 1983, Denis drew two western features for LOOK AND LEARN before beginning an eighteen year stint on Thomson’s Pocket Picture Library monthly war series, COMMANDO [each with 64pp] and produced about one a month.

In case you are interested, the Boardman annuals had record sales of over 250,000 copies each year.

In addition Denis produced around 1000 paperback covers including the stylised text on each one, Like Dudley Watkins, Denis is still fondly remembered by fans and his work much talked about though whether anyone will actually come up with a final tally of how many thousands of pages he actually produced during his life-time I don’t know.

Denis was married, in 1948, to Dorothy Bain, however, she passed away in 1996. To date I have been unable to track down Colin.

At 84 years old, Denis was working 6 days-a-week and shows that age is no barrier to a comic artist/writer of quality.

Denis will be much missed.

There is a wikipedia entry regarding Denis's death:

"Exactly a week after his 84th birthday and while in good health, Denis McLoughlin committed suicide. He used a Colt revolver that had been part of his reference collection for years and that friends and family thought was non-functioning. The cause of Denis' death was not immediately revealed in the British press. Exactly why he chose to end his life can never be known. However, he had survived all of the persons dearest to him including his wife, Dorothy, and brother, Colin. Denis and Dorothy had no children.
"Like many others who devoted their life to commercial art in the first half of the 20th century, Denis McLoughlin was never paid a great deal for his work. Many pieces of his artwork, the Boardman book covers in particular, which Denis had been promised would be returned to him, were either lost or ended up in private collections. While he made a living, Denis never accumulated much money. Although he had a pension from the British government, he was forced to augment his income by working long past retirement age. He once commented that he never particularly liked illustrating military topics and yet that is what he found himself doing for the last 20 years of his life."
Sad story but all too familiar amongst the old comic creators. 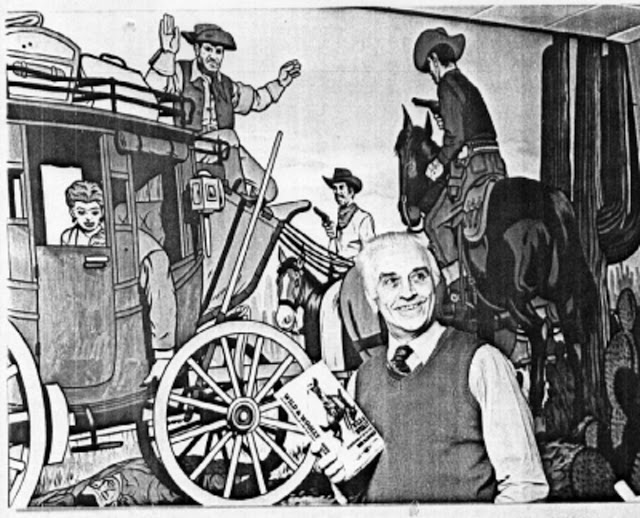 Denis McLoughlin in his work room (circa 1980). He is holding a copy of the American first edition of his book Wild and Woolly: An Encyclopedia of the Old West. Note, also, the Western mural by McLoughlin.
Posted by Terry Hooper-Scharf at 16:03