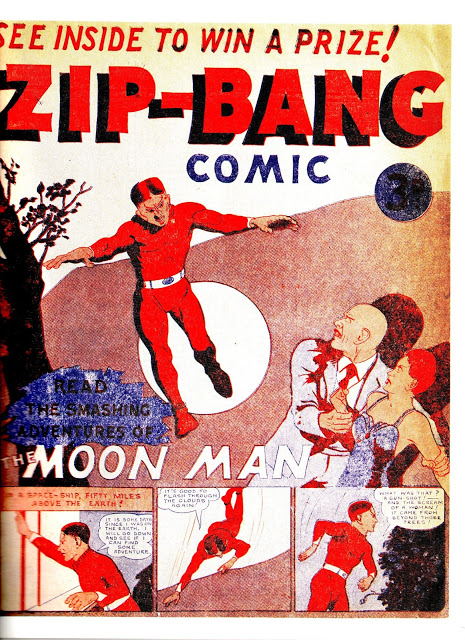 Just over a week ago "unknown" responded to an old Comic Bits Online post where I mentioned I was still looking for Zip-Bang comic which featured the one and only appearance of Moon-Man. I was told that "Unknown" had purchased this from the Gifford collection that had been sold after his death.
That was it. No offer of a scan just how many pages the character took up.
Did I as for a scan? No I was polite and mentioned the subject but left it at that. Not heard from Unknown since.
Why didn't I get more excited? Simply because, over the last couple decades on the internet I have heard this all before. I mention a book I am looking for and..."Oh I have that book in my collection" or "I regularly read my copy" and if I asked about a scan -"Oh no -I don't scan" or "Scanning might damage the book".
On the old Yahoo groups I knew three members who claimed that they had Back From The Dead, Krakos or any number of other books. Scan and share? Same old excuses including the "I don't scan or share or then the book wouldn't be rare"....a scan does not make your book any less rare or sought after!
In fact, I do not believe those people even had the books. It was and is a wind-up pure and simple. I did note that those same people took my scans and started uploading them to various sites and guess what "Original source/scanner unknown" -so they kind of take the credit.
Sad really that fandom on this particular aspect of comics has all but vanished but there you go. I do not mind people using my scan so long as they credit source but it never works that way -there's even a fella in the US using some of my scans for his make-a-buck "public domain" books.
Ahhh, fandom
Posted by Terry Hooper-Scharf at 16:24